Homesharing schemes in France bridge divide between the generations 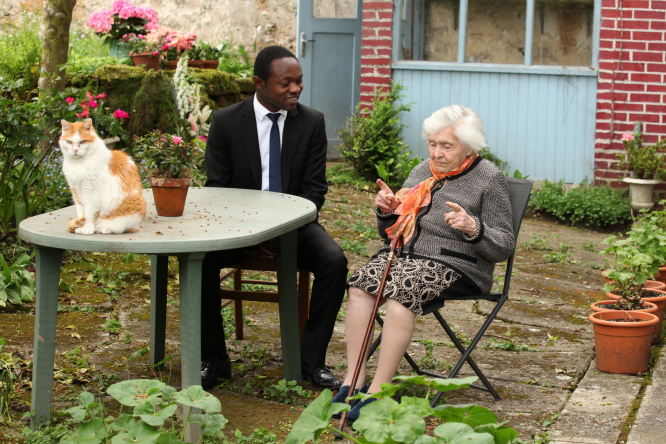 Mamoutou and Lorette have found that they have stimulating discussions despite the sizeable difference in age Pic: Ensemble2générations

So much are they growing in popularity that more than 600 young adults have been placed in the homes of elderly members of one of the main associations in this field, Ensemble2générations, which has won several awards in France for its work encouraging social links.

Another company specialises in matching students with families who offer accommodation in return for babysitting, help with a foreign language or other useful services. Last month 1,700 students moved into the homes of families signed up to CoHomly in preparation for the new academic year.

Founder Florence Féret-Chapt said the numbers have been growing steadily since it launched in 2017.

“We have lots of students in university towns like Paris, Lyon, Grenoble, Lille, Strasbourg and Bordeaux.

“It’s very much a principle of exchange, where the students don’t pay rent for their accommodation but receive it in exchange for services.”

Families who sign up for the programme can choose which particular assistance they would like from their students. For example, a family hoping to improve English skills might choose an English-speaking student, while those with young children could opt for students happy to babysit.

“We have quite a number of expatriate families who live in France, as we find they are more open to housing students. They tend to want help in learning French, and need help with schoolwork for their children.

“Most of our subscribers are families rather than retirees looking to house students in this way.”

Ms Féret-Chapt said numbers had grown due to Covid.

'I don’t feel the difference of generations. I am 100 and he is 27, so what?' - Centenarian hostess Lorette

“It has reinforced the benefits. Students in student accommodation can feel isolated, so this programme reassures parents and creates links between the families.”

The relationship between 27-year old Malian student Mamoutou and the family of his centenarian hostess Lorette is a solid example.

Mamoutou, a student in management and information technology, says it is one of the many plus points about his living arrangements with her in the Ensemble2générations scheme.

He moved into Lorette’s spare room in Essonne when she decided it would be comforting to have someone in the house with her at night.

“She is like a grandmother, she teaches me a lot of things. Our life is very convivial. I want to learn about France, its culture, its values...

“I’m interested in knowing what Madame has experienced. We also talk a lot about religion. She is Catholic and I am Muslim. We realise that we have the same values.”

He said he was surprised by the affectionate presence of Lorette’s family, adding it was like being in Africa. “I, too, feel surrounded by her family. We have a lot in common between French and Africans.”

For Lorette, the appreciation is mutual. Mamoutou brings her a feeling of security, she says, and the opportunity to talk to someone face to face at the end of the day.

“He tells me about Mali, his studies. I explain to him, for example, how I lived through the war.

“The current crisis is difficult, but we’ll get through it, whereas war reveals terrible things about human beings. I also talk to him about my husband. These are subjects that do not fascinate my grandchildren so much. He listens to me.

'It is part of ... creating bridges between generations, cultures and civilisations' - Typhaine de Penfentenyo, founder of Ensemble2générations

In both schemes, rent is not paid but both parties pay a sign-up fee and there are other costs, depending on the ‘formula’ chosen.

With Ensemble2générations, there are three options, varying by the level of interaction sought.

Option 1 “provides a reassuring and caring presence” but only in the evening, at dinnertime, and at night. The sign-up fee is €390 per year. For those looking for ‘mutual aid’, the ‘economic rent’ package includes regular time talking, going to the theatre etc, for which the young adult pays €150 a month plus the €390 fee.

‘Interdependent accommodation’ options see people cohabit side by side. Charges vary by region, up to €400/month for the lodger. The fee is reduced to €300/year.

Older people must pay the €390 fee but for ‘interdependent accommodation’, it is reduced to €220 per year.

The CoHomly scheme is framed differently. Families and students can sign up for up to €24.99 per month.

Once registered, students can pick a family from profiles posted on its website which best suits their needs, and vice versa. Families list in their profile what help they need and how much financial contribution they expect. This varies from nothing to around €250 per month.

Typhaine de Penfentenyo, who founded Ensemble2générations in 2006, said intergenerational living encourages people to look at others differently, without prejudices.

“Each person is no longer ‘young’ or ‘old’ but becomes a person.

“It is part of a deeply human and spiritual approach, creating bridges between generations, cultures and civilisations because difference is a source of richness.”

Ensemble2générations (E2G) accepts single students aged 18-30 and is open to international candidates who speak French. There is an interview and a meeting with the host.

E2G provides an accommodation agreement, an inventory of fixtures, and a list of tasks agreed. Hosts must be 60+ years old with a spare room.

With CoHomly, students and families connect via its platform. Once registered, either party can create an advert to go online, once validated.