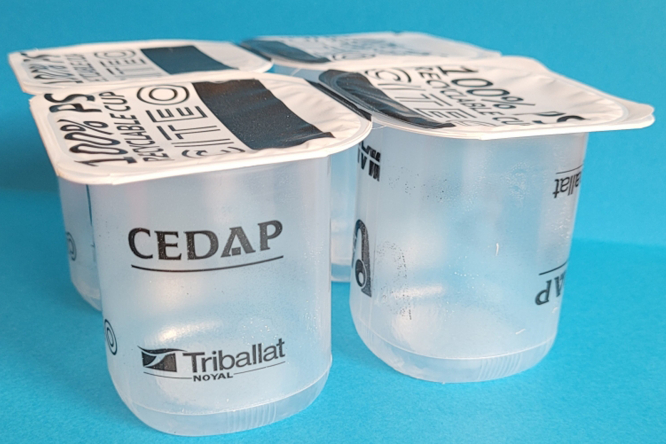 Currently, almost all yoghurt pots are incinerated because the mix of materials used makes them difficult to recycle Pic: Plastiques Venthenat,

Throwing away yoghurt pots with household rubbish could soon come to an end, thanks to the invention of a new material designed to make them recyclable by 2025.

Currently, almost all pots are incinerated because the mix of materials used makes them difficult to recycle.

Typically, the container is made of polystyrene, while the labels glued around the pot are a wax-paper laminate.

No way has been discovered to easily separate this wax paper from the pots.

However, Plastiques Venthenat, has developed a polystyrene film which can be printed in the same way as the wax-paper laminate.

Managing director Michel Rauturier told The Connexion: “If the yoghurt pot is all made of the same material, it will be easy to separate and recycle when pots are put in yellow recycling bags.”

Research work was recently threatened by the introduction of a bill in parliament to ban the use of plastics in food wrapping.

“It would have meant our two years of research and development, which were slowed down because of Covid, were for nothing,” said Mr Rauturier.

“We explained and MPs changed the law, which will allow plastics now as long as there is a recycling system for them by 2025 – something I am confident will happen.”

Mr Rauturier said the printable polystyrene must still be tweaked before getting regulatory approval, but he is optimistic it will soon be used on an industrial scale.

“Manufacturers see its utility and the benefit of having fully recyclable yoghurt pots, and I am confident the last tests relating to how it is printed on the machines they have can be solved,” he said.

“When you think of the number of yoghurt pots sold daily all over the world, it is good to think that something from our factory can make a difference.”