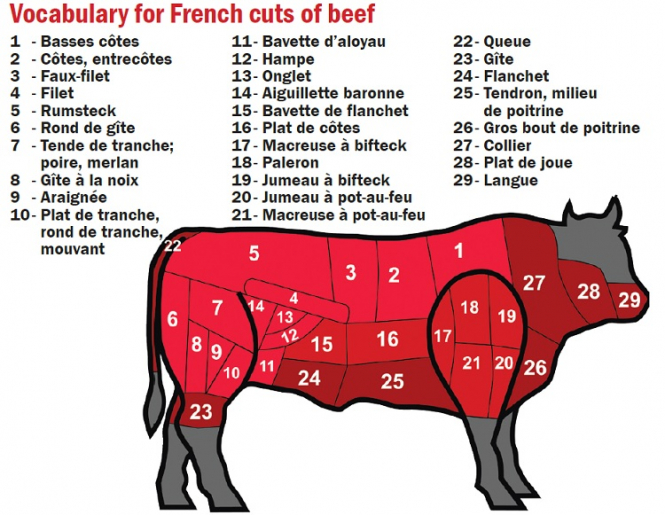 It can be confusing to know what cuts of meat to buy – especially with beef, as it is butchered differently in France.

There are more beef cuts in France, and some cuts which exist in the UK are used in a different way.

Daren Smith, who runs Elliotts Boucherie in Gorron, Pays de la Loire, works with both French and English cuts and said bavette d’aloyau is a typical example of different treatments.

“This comes from the flank and translates as skirt in English,” he said.

“We would most likely slow-cook it to make it tender but the French are far more likely to flash fry so they cut the bavette in very thin slices, fry or grill it quickly and it remains tender.”

He said it was the same for chuck steak, used in casseroles in the UK but cut thinly and grilled in France, or used in boeuf bourguignon.

For other cuts there are straight-forward equivalents – see table below.

Fillet is filet and is regarded as the best cut in both countries.

Mr Smith said the British are often put off when French supermarket meat does not come up to expectations.

“Shrink-wrapped beef off the shelf may have come from a 10-year-old cow and then even a fillet will never be tender,” he said.

“UK supermarkets tend to be more selective and have better meat. In France, it is worth paying more to an artisan butcher for good quality and they will also give cooking advice.”

Pork and lamb are butchered in a similar way in both countries.

However, there are some British specialities, such as bacon and gammon, that you cannot find at a French butcher as they are not eaten here. Sausages too are different.

“In France, they are made from meat, gristle and flavourings, which are passed once through a fairly coarse mincer,” said Mr Smith.

“In the UK, meat plus breadcrumbs and flavourings, but no gristle, is passed through a fine mincer, twice.”

At Elliotts, Mr Smith and his wife Lorraine are just as used to selling a French customer oxtail, blade and cheek for a traditional French pot au feu, as selling English-style sausages to a British client.

They deliver around the country using the Chronofresh refrigerated service.

* In the UK these are also used for stewing or braising

French cuts araignée (highly flavoured, with a ragged appear­ance, from the groin) or collier (neck)would be minced in the UK.