Life in France for children with learning difficulties 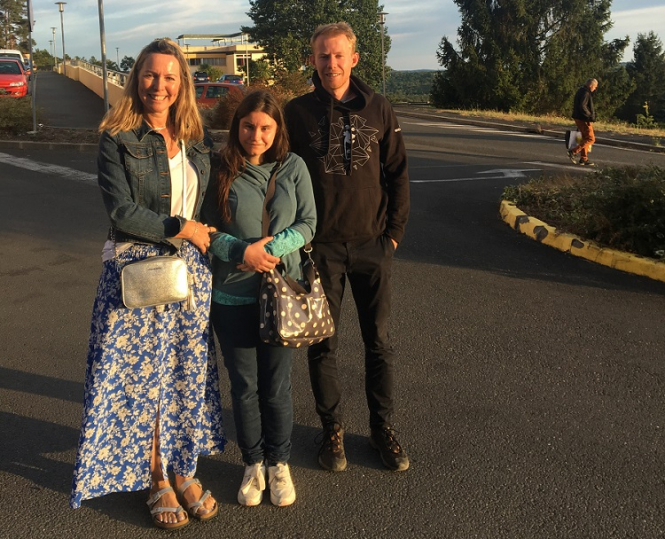 Moving to France with a child who has learning difficulties adds challenges to the already complicated issues of sending a son or daughter to a school in a foreign country.

Stephanie Miles-Graham, now 26, was born with a rare chromosome deletion which means she has health problems and learning difficulties.

Her mother Tracey tells her family’s story in the hope that it might help others in a similar situation.

She said: “When Stephanie was born, doctors thought she might never leave hospital, but she is a fighter. She had astigmatism and a hole in the heart, and needed operations when she was young.

“She walked late because she had lazy muscles, which still cause pain if she walks or stands for long periods.

“When she was 13, she was diagnosed with double scoliosis, so had to wear a back brace for two years.

“She has an amazing memory and was able to pick up French and is now bilingual, but she has some learning disabilities and education has been hard.

“There have been lots of ups and downs – Steph is vulnerable, naïve, funny, adorable, people love her and she never ceases to amaze us.”

The family worked hard and constantly to find special needs classes in mainstream schools which eventually proved to be good.

Her first school in France was the local collège near her home in Saint-Martin-de-Gurson, where she coped in class but was bullied because of the corset she had to wear.

“I lost faith in the headmaster.

“When I saw Steph bullied and pushed over at the school gates one day, I found it very difficult to get an appointment with him, and when I managed to talk to him in the school grounds, he simply said she should not even be there. I took her out that very same day.” Stephanie then went to a private school for a while, but returned to her original collège when the first head left and a class for children with learning difficulties was opened.

“Ten pupils went to this class and had lessons full-time with no free periods, but got the extra help they needed, and were not given any homework,” said Mrs Graham.

“It was excellent. The teacher was caring and gentle but disciplined.”

After collège, Stephanie wanted to train to be a secretary. After a couple of false starts, including time at a special school where she found it difficult to be with students with behavioural issues, she enrolled in a class for bac pros with learning difficulties at a lycée in Bergerac.

“There were 10 pupils doing different bac pros, but they came together in a special class to study for their core subjects, like maths and French.

“The main teacher in this special class was exceptional, over and above fantastic, as were the teaching assist-ants. This teacher played a big part in the success that Steph has had since.”

Since school, they have found opportunities for her to work and live independently in the network of ESAT structures - workplaces for adults with special needs (see below).

“There are several all over the country and she has been to two. The first was a paper factory, where Steph used to prepare the orders to send out, as well as make stationery. It worked well.

“Stephanie was definitely one of the three at a higher level and she lived in a flat in the town in shared accommodation. It was a struggle at first, but the landlady was kind and a great support.

“The second made high-quality regional food. This was harder because the level was lower and there was a lot of shouting and noise, which Stephanie found disturbing.

“She still wanted to train as a secretary and we have now found a wonderful establishment, Clairvivre, near to Hautefort, Dordogne.

“It is a mini-village originally created for war wounded and their families after World War One and is now a centre with training, an ESAT, and medical and accommodation facilities for people with a range of disabilities. So far, it is working well for Stephanie.” Mrs Graham said it is difficult to offer advice to anyone living in France with a disabled son or daughter because it depends on each individual situation, but she has some tips.

“I think our journey would have been so much more difficult if we didn’t speak a good level of French, so learning the language is crucial.

“Being tenacious is also important, so if you don’t get the help you need from someone who should be helping, look elsewhere.

“I also think it is important to remember that the specialists might know a lot of children but no one knows your child as well as you do, so have confidence in yourself and what you believe is best for them.”

There are around 1,450 dedicated establishments across France which provide work and training for people who cannot get a job in a classic business set-up because of physical, mental or psychological disabilities.

One site in the Dordogne works on producing simplified versions of classic novels for children or adults who find reading French difficult, starting with Le Petit Prince.

There are also 800 Entreprises Adaptées (EAs), which are run like other businesses but at least 80% of the workers have disabilities.

Aurélie Berlioz, director ESAT-EA for Réseau Gésat (reseau-gesat.com), the national body which promotes the work of the ESATs and EAs, said: “Trained staff in each establishment ensure working conditions are suitable for each individual as circumstances are so different.

“ESATs have onsite healthcare and accommodation for those who cannot live alone. They give real solutions for the disabled to find some autonomy.”

Workers are paid below the minimum wage, but have access to other benefits.

To get a place in an ESAT or EA, apply to the local Maison départementale des personnes handicapées (MDPH).

Cases are examined by the Commission des droits et de l’autonomie des personnes handicapées (CDAPH) to decide the best structure for each applicant.