'Paradise island' for sale for €1.5m in Côtes-d'Armor, Brittany 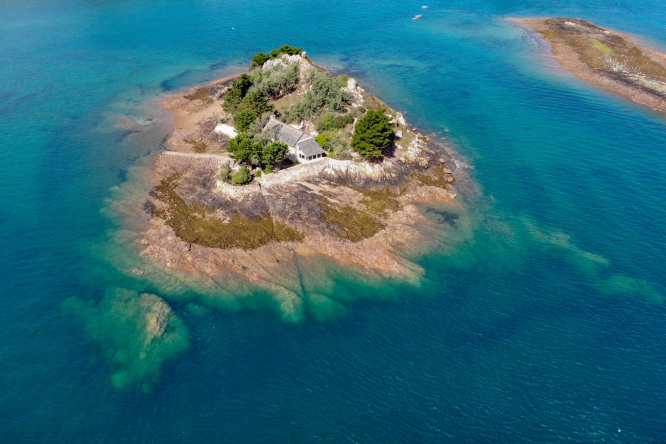 'The sellers used the island mainly as a holiday house, but it is well equipped enough so that someone could live on it year round,' Pic: Sotheby’s

On the island’s highest point, 21 metres above sea level and joined to the house by a walkway and stairs cut into the rock is a small watch tower.

“It was built as a customs post and lookout to try and stop smuggling, which was a big problem with boats going to and from England,” said Peter Bos, the Sotheby’s estate agent in charge of the sale.

“It was only bought from the state in the 1930s by a local family, who kept it until the early 1990s, when the present owner purchased it and did a huge amount of work to bring all modern comforts.”

Electricity, water and telephone lines now connect the island to the mainland, near Paimpol in Côtes-d’Armor. Other work involved a new roof, digging into rock at the back of the house to fix a damp problem, and building a conservatory-style living room commanding a view across the mouth of the estuary.

“There is always movement with the water, tides, clouds and sky, but also boats going to and fro – it is a magnificent spectacle,” said Mr Bos.

The only access, apart from wading across a mud flat at spring tides, is by boat. The previous owners used an amphibious vehicle via a ramp built on the island.

“The sellers used the island mainly as a holiday house, but it is well equipped enough so that someone could live on it year round,” said Mr Bos.

“Unfortunately the man died and his widow decided that it was best to sell rather than keep it for herself alone.”

Furniture is included in the asking price.

A first attempt to sell, starting in 2019, did not yield a buyer and was complicated by Covid restrictions, which is why the island has been re-listed at the current price, €100,000 less than before.

Mr Bos said he was confident it would find a buyer.

“I have had several people who had property down on the Med, who have moved to Brittany, because of the milder climate. With views such as this island has, I am sure there will be interest.”