Cookie Consent by FreePrivacyPolicy.com Rise of no-licence car you can drive in France at 14 French News and Views in English | The Connexion
9 may 2021
Classifieds Currency exchange Newsletter
Login Register BASKET
Facebook Twitter 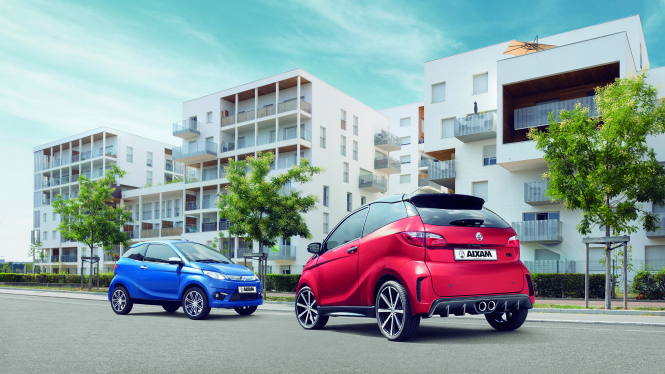 An increasing number of people in France, particularly teenagers, are driving voitures sans permis – little cars that can be driven without a licence from the age of 14.

To drive one, you only need an “AM licence”, which requires eight hours of training – as for a scooter. This includes a theory test which can be taken at school, aged 14, plus a few hours in a driving school.

No training is needed for anyone born before 1988.

The cars can be driven by anyone banned from normal cars for motoring offences, including drink-driving, after extra training. Several firms have launched models, including Renault with its Twizy, but the European leader is Aixam, followed by Ligier – both French. Prices are €7,000 and €20,000.

“We now have working people and especially young people who are an emerging clientele.”

Young people represent most customers on the Riviera around Cannes, Nice and Saint-Tropez, she said. “Not everyone takes a test but there comes a time when people see they need a car to go where they want.”

Sans permis cars are not allowed on motorways and are limited to 45km/h. They cannot exceed 450kgs and have been limited to 3m in length and 1.5m in width since 2018. Insurance prices vary according to the car, the profile of the driver, and the insurance company.

The cars are also an alternative to mopeds, which often seem more dangerous to a lot of parents. Mrs Whitaker said: “It is safer than a moped, it is also more comfortable. It is automatic and easy to drive.

“There are many advantages. You can have a passenger. It allows young people to be autonomous and mobile. It also prepares them very well for the driving test as they get used to the road and the traffic regulations.”

For the association 40 millions d’automobilistes, young people should be encouraged to drive this kind of cars. Representative of the association, Pierre Chasseray said: “If young people can drive a moped, they can drive these cars too and it is much more secure for them. There are less accidents with these cars than with mopeds for example. And it makes them more responsible.”

Sara Larsson, 44, bought one of these little cars for herself, when she moved to France before passing her driving test here. Her 17-year-old son started to use it as soon as he was 14 to go to his boarding school, 40 minutes away from his home, near Bordeaux.

She said: “It is more reassuring to have him in this car than on a scooter. Everyone can see him on the road. It is really secure. It made him more responsible and next year he will get his driving licence. However, when I drive it everybody assumes that I am a drink-driver. There are lots of misconceptions and people tend to think that you can just drive it without being trained.”

Sophie-Ann Bull, 49, was living in London and never needed a car before moving to France. Now living in a village in Normandy, she has bought her second sans permis car after 10 years of driving her first one. She said: “I bought my first one in 2009 when I moved to France. I needed one because my father was at the hospital I was 12 miles away from the village and I had no way of getting to the shops or to do anything. This is ideal, especially for people like me who do not have a licence.

“My first little car could be spotted a mile away. It had manual windows, no heating but my current car has electric windows, automatic boot opening, central alarm, central locking, central heating, radio… These little cars are fantastic. As I live on my own, it would be a challenge to live without it. People who say they are dangerous are people who have not tried them.”

Vicky Boundy, 48, who lives in Callac (Brittany) drove a sans permis car for two years before having an accident. She said: “I don’t have a driving licence so I got this car and it was very useful. It is very cheap to run and it is very good. I could take my husband to ferry port and pick him up.

“Unfortunately, I had an accident. A car hit me and because the car is so small it got beaten up. I think a lot of old people who are not confident in a normal car use them and there are more and more young people who use them.

“For people like me who do not have a licence, it is perfect. It is very expensive to buy but once you have it, it’s cheap to run they do not use a lot of petrol. I loved mine and I wish I had another one.”

Phyllis Weitl, 72, living near Saint-Brieuc (Brittany) had an American driving licence which expired in France. She said: “It is very difficult to get the French driving licence as you have a test in French and only have a few seconds to reply.

“It was too hard as I needed time to translate the questions and answers so I couldn’t do it. So I bought a sans permis. It is more restrictive because you cannot go fast or drive on all the roads but it is useful. Sometimes people think that I am an alcoholic but I am not. I can drive.”

Irene Babinet, 84, who lives in La Rochelle said: “When I hit the age of 70, my licence had to be renewed and I had to take a driving licence in England and I did not want to do that.

“My husband does not drive. He is a musician and he needed to be driven, so I bought a sans permis.

“They are known as the boozer cars as they are normally bought by people who lost their driving licence. They are very expensive to buy new or second-hand. You cannot drive very fast but they are useful.

“I haven’t got one now because I don’t want to drive anymore. They are useful but not for long journeys. They are good for people who do not have a licence. I had three different cars, two second-hands and then I bought a new one which I kept for three years before selling it back to a garage.

“They are all right for older people who do not want to drive very far. And they are good for doing your shopping. The boot is generally of a good size. They are comfortable. They can be managed easily. The steering is quite light so you have to careful. It takes a bit to get used to them but they serve a purpose.”