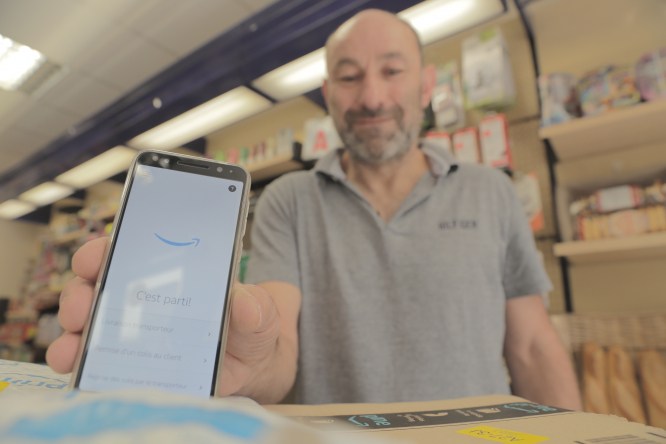 ,Amazon is a target of demonstrations because everyone uses it and everyone knows who it is', says Vincent Drezet, a tax expert with Attac
By Brian McCulloch

Amazon is the largest e-commerce site in France, with 30% of the market.

Analysts say that in 2020 its sales are likely to have been boosted by between 40% and 50% during the two lockdowns.

The public say they are generally happy with the US giant’s service – but the company has become a bugbear for politicians of all political stripes.

The mayor of Paris, Anne Hidalgo, and former environment minister Delphine Batho were among those who signed a petition for ‘an Amazon-free Christmas’, and a poll found 70% of the public agreed.

The mayor of Lyon has joined local businesses in a legal action against a new Amazon warehouse near the city’s airport.

The company has been subject to EU investigations into alleged unfair commercial practices, with some independent traders who sell via its platform accusing it of making their profitable products hard to find on the site and using their data to boost sales of its own, or favouring sellers who use its own delivery services.

It also caused controversy with charging just one centime for delivery, after France banned free deliveries to help local shops.

French media L’Obs cited that some people are in a moral quandary over the convenience verses the ‘shame’ associated with using it. One reader explained how he quickly hides the packaging before going home with delivered purchases.

Amazon hopes to double its presence in France in the next three years, with a large warehouse and up to ten new distribution centres set to open each year

E-commerce and logistics expert Jérôme Libeskind, who runs the Logicités consultancy, said: “It is now inconceivable that President Macron, who opened an Amazon logistics centre three years ago, would do the same now.

“Local politicians love Amazon because they bring jobs and taxes – workers like them because they usually pay above the Smic minimum wage and have excellent working conditions [good canteens and sports clubs etc] but their public image, led by politicians, is terrible.

“My opinion is that it is mainly down to very bad corporate communications.

“Not only do they not publish any figures about the business they do in France, but they actively shunned all the think-tanks and government inquiries into e-commerce that have taken place in France to formulate policies around e-commerce.”

He added that the company, which he said did many things very well, was absent in the environmental debate in France.

“They build their sites away from the logistics areas developed by local and regional governments, no doubt because it is cheaper to do so, but by doing so they increase their negative environmental impact because there are no synergies and their workers have to have cars,” he said.

“There are sites which are far worse, which escape the sort of demonisation Amazon gets.

“For example, tests with Alibaba’s French sites show that items bought for €20 on it routinely have €2 as the value on the customs declaration to escape customs duties – but no one is going after them.”

'Amazon can join us, or it can remain a symbol of what is wrong'

Amazon is a target of demonstrations because everyone uses it and everyone knows who it is, said Vincent Drezet, a tax expert with Attac, an association which acts as a left-wing think-tank while also taking part in direct, non-violent action.

“And yet it is a symbol of many things in our evolving society, with points about the economy, environment, society and fiscal policy, which are illustrated and magnified by Amazon, which we question.

“Do we really need to be pushed to consume things we do not need which come from the other side of the world?” he said.

“And while Amazon is not solely responsible for the problems of town centres, it does not help when people buy books from it rather than the local bookshop.”

On the tax question – often a criticism against the firm – he said his research showed around a third (30%) of e-commerce sellers cheated on VAT, especially those sending goods from outside the EU.

“Amazon is not responsible if people are using its platform to cheat, but as the largest e-commerce marketplace, it is a symbol, which is why we use it to highlight the problem,” he said.

As to the future, he said: “We have to accept e-commerce exists and is here to stay, but we want it to be better regulated so it does not harm the environment or French businesses, or its workers, and pays a right amount of tax on the business it does. Amazon can join us, or it can remain a symbol of what is wrong.”