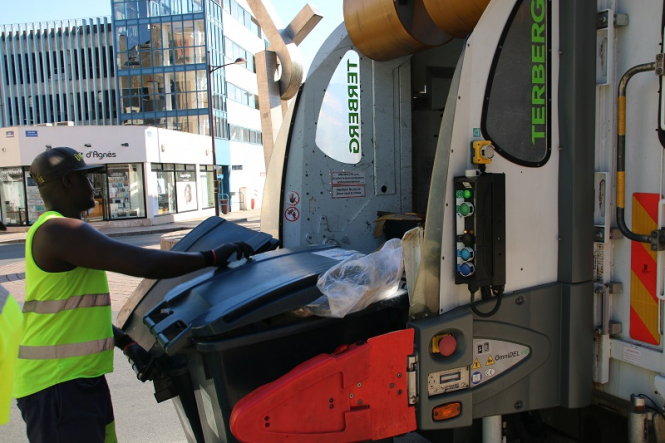 A dry waste collection at Châteauroux, Indre, which has resulted in a higher recycling rate than using other systems
By Connexion journalist

The plan is to advance the country’s stated aim of 100% recycled plastic by 2025.

One of the key points of the loi anti-gaspillage is to reintroduce a money-back system on bottles from the shop where they were bought.

The government has said it is still studying how this should be implemented and whether it could include glass, cans and batteries.

To prevent destruction of unsold goods, the law would make it illegal to destroy new non-food items, which instead will have to be recycled or given away. Electrical appliances, bathroom products and textiles are the biggest culprits.

At present, manufacturers are responsible for financing what happens to a list of products at the end of their life and contribute, for example, to the collection and recycling of that product.

The law would add toys, wipes and cigarettes, as well as sport, leisure, DIY and gardening equipment.

Eco-friendly manufacturers will be given incentives, while those who are not will be penalised.

To encourage the building industry to recycle, certain waste materials could be accepted at recycling centres without charge, as long as they are sorted first.

The recycling industry says this is a waste of money and will do nothing to help achieve the goal of 100% recycled plastic by 2025.

They have a different proposal to make recycling simpler for everyone.

Jean-Philippe Carpentier, president of FEDEREC (pictured left), which represents 1,100 recycling businesses, told Connexion why he is against the government’s plan.

Money back on bottles has been imposed without debate or consultation or looking at other solutions.

It will not solve the plastic recycling problem but will just make a few big brands appear greener.

It will cost the public money, because it will push drinks prices up, but not all bottles will be returned.

It will give big supermarkets more power, because they will be the only ones to have the necessary systems to reclaim bottles, and it will reduce local authorities’ income by around €450million a year.

This is what they gain by selling bottles to recycling factories, and what they will no longer be able to put back into dealing with waste.

Why concentrate money and effort attempting to recycle an extra 100,000 tonnes of plastic, when the real problem concerns 1.3million tonnes of packaging produced for the domestic market each year?

Why only apply it to PET plastics? Why not use it on HDPE plastics (also used for bottles)? Why not introduce it for glass?

First, we must look at what we have to achieve as a country: 100% plastic recycling by 2025, end of single-use plastics, with only reusable or recyclable plastic packaging on the market by 2030, and domestic food and plant waste to be collected at source by 2023.

The present system malfunctions, so our solution is to simplify sorting for the general public. It needs to be the same across the country, the same whether you are at home, in town, at the station or airport.

Instead of a system where we ask the public to work out what to put in what bin, we will have two simpler categories: wet, including nappies, wipes or cat litter, for example, and everything that is dry in another bin.

Dry materials will be taken to the sorting centre, where we will leave it to machines to work out what is and what is not recyclable, as they are sophisticated enough today to do that.

A total 99% of bottles are already collected: 57% are in the yellow bins and recycled, but the remaining nearly 43% are not, because they have been put into the wrong bin. So we need to simplify the system so the rubbish is put into the right place.

We know that people already throw their rubbish in the bin, but not always in the right one. Sometimes they do not have the choice.

If you look in a waste bin on the streets of Paris, 90% of rubbish will be packaging, because recycling bins will only accept certain categories of waste.

Eventually, we would like to see four categories of waste. Dry, wet, glass, which is better kept separate, and in the future food and plant waste, which will be taken to methane plants that will be developed around the country, to meet European requirements.

Châteauroux, Indre, already has the dry/wet system and it has a higher rate of recycling than other local authorities.

We estimate it collects 98% of recyclable waste. We have the capacity today to achieve these kind of figures.

The recycling system we use today reflects the technology available in the 1990s, but there has been so much progress that we can revolutionise recycling today.

We would like to see more debate as there is no real exchange between the different concerned parties. We have a proposition. It is perhaps not the best one but we need to be able to discuss it.