Simon Heffer: ‘Efforts to curb France’s anti-Semitism is not working’ 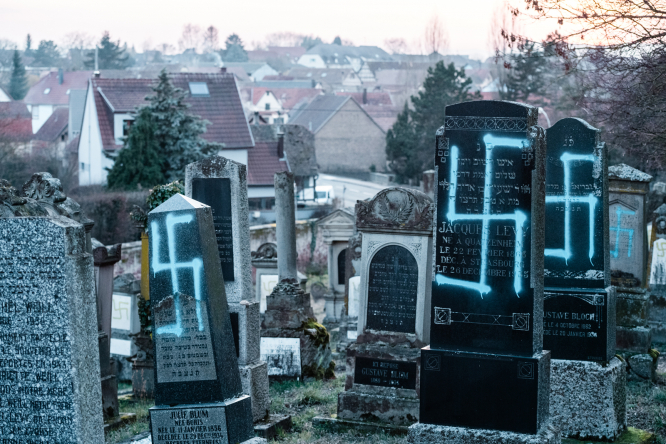 Jewish cemeteries and graves are regular targets for France’s anti-Semites, like pictured in 2019 near Strasbourg Pic: Hadrian / Shutterstock

France has long been associated with anti-Semitism, with some historians dating this bigotry back to the Revolution of 1789.

The Dreyfus affair highlighted the problem. It began in 1894 and resulted in an innocent Jewish army officer being sent to Devil’s Island in French Guiana for an act of treachery he had not committed, suspected because of his ethnicity.

In 1936, when Léon Blum became prime minister, he was attacked as much for his Jewishness as for his socialist politics.

Many French behaved abominably after 1940, notoriously in the round-up of Jews at the Vel’ d’Hiv in Paris in July 1942, prior to their deportation to Auschwitz.

Vichy France did nothing to protect Jews, thanks not least to Louis Darquier de Pellepoix, its commissioner for Jewish affairs. Darquier was sentenced to death in 1947, but escaped to Spain and died in his 83rd year. France never found the will to get the Spanish to give him up.

Examples abound today too. In August, Samuel Goujon, editor of the anti-Semitic website Ils sont partout, was indicted for hate crime. His website’s name (‘they are everywhere’) is a sick allusion to the collaborationist anti-Semitic newspaper of the war years, Je suis partout.

Why France should be so hostile to Jews – a hostility that long precedes the growth of Islamic fundamentalism here, of which Jews are distinct targets – is unclear.

Like all other emanations of prejudice, it can be explained only by feelings of fear and ignorance that successive generations have justified culturally by their acceptance of them.

Just before the pandemic, 20,000 people marched in Paris against anti-Semitism. However, the intellectual Alain Finkielkraut was insulted in the street and told to “go home to Israel” by gilets jaunes shouting “France is ours”.

Now, placards bearing the word ‘Qui?’ (‘Who?’) – an anti-Semitic trope – have appeared at a protest against the Covid vaccination passport, and swastikas have been daubed on a memorial to Simone Veil, a Holocaust survivor.

Dieudonné M’Bala M’Bala, a so-called comedian who has been convicted serially for hate speech, embodies the development of French anti-Semitism in recent years. He began as an agitator of the far left before moving to the far right; today’s anti-Semites, just like those in Britain, are on both extremes.

Jewish cemeteries and graves are regular targets for France’s anti-Semites. A typically revolting incident occurred near Strasbourg in December 2019, when more than 100 graves were smeared with swastikas and anti-Jewish slogans.

The attack spurred the president to berate those who engage in hate crimes, incidences of which were already rising. The government reported a 74% increase in anti- Semitic offences from 2018 to 2019.

Before the pandemic, for example, the government coordinated a week of programmes in schools to tackle racism and anti-Semitism.

However, these efforts seem to have had precious little effect when it comes to halting this vile behaviour.

There are more Jews in France per head of the population than in any other country except Israel and America, but many claim to feel threatened or unsafe.

Barely a month goes by without some high-profile attack on them, their property or their culture: in the last few weeks there has been more vandalism of Jewish graves.

Whatever else he can be criticised for, President Macron has been unequivocal about his disgust at such behaviour. He recently announced he was boycotting a United Nations conference on racism because it has a history of people uttering anti-Semitic remarks.

Last year, on the 75th anniversary of the liberation of Auschwitz, he called for people to be educated out of intolerance; and professed that the wounds of Hitler’s extermination of the Jews should never be allowed to heal, to remind society of the wickedness it entailed.

It was, of course, a wickedness in which French people assisted. Equally, some did all they could to shield Jews in their communities.

In 2019, after yet another spate of anti-Semitic attacks, President Macron told the annual dinner of the Conseil représentatif des institutions juives de France that the country needed to draw “new red lines” against racial hatred.

He said a law would be introduced to curb hate speech online, demanded action to dissolve three right-wing extremist groups, and urged schools to combat the bullying and victimisation of Jewish children, which has forced many parents to move them from state schools to private Jewish ones instead and, in the process, separated them from the mainstream French society into which they ought to be fully integrated.

More controversially, the president has argued that anti-Zionism is a form of anti-Semitism and should be treated as such.

Macron was also sulphurous when a decision was upheld earlier this year not to prosecute Kobili Traoré, who in 2017 murdered Sarah Halimi, a 65-year-old orthodox Jewish woman, by pushing her out of a window while yelling “Allahu Akbar”. He was deranged by cannabis and deemed unfit to stand trial.

The president demanded the law be changed, reflecting the outrage of Jewish groups. He told Le Figaro that choosing to take drugs and killing someone as a consequence did not negate criminal responsibility.

The problem, however, is that no matter how loudly leaders condemn anti-Semitism, too many French find it acceptable.

You can disband extremist groups but it is not so easy to change the mindsets of those who join them.

If these attitudes really have been around since 1789, Macron’s condemnation will not be enough. France will have to step up the ferocity of its response to the Jew-baiters, or accept that it will soon be as internationally famous for anti-Semitism as it is for champagne, haute couture and the novels of Proust.