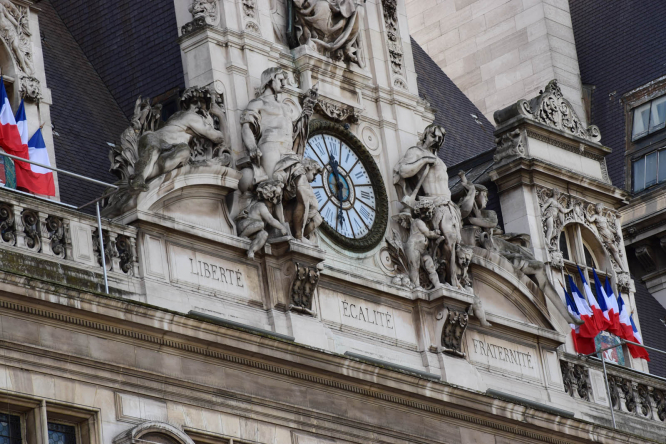 'The cultural difference is such in France that the French electorate continually votes for presidents and governments of all parties who promise to have the state provide elaborate public services' Pic: Sergio Infantes / Shutterstock

This means the government takes every cent a French person earns for the first 200 days of the year, and he or she reaps the fruits of their labours for just 165 days.

In the United Kingdom Britons work for the state until May 31, the 151st day of the year, and work for themselves for 214 days, or 59 days more than their French counterparts.

Of course, it isn’t that simple.

The cultural differences between the two countries mean the French electorate continually votes for presidents and governments of all parties who promise to have the state provide elaborate public services.

State education is France is felt to be so good that the fully private sector is small.

Most parents who have their children privately educated pay only for elements of teaching not demanded by the state curriculum, so those schools are effectively subsidised.

French healthcare is highly regarded, and the latest figures from the OECD show the country to devote a high amount to it as a proportion of GDP, that is 11.2% compared to 9.8% for the UK. Both countries systems have struggled with Covid.

Where the two diverge in social spending is the amount paid for pensions and social security, with France spending more than 20% of GDP on them but Britain only half that.

France’s unemployment rate, even before Covid, was around twice Britain’s, which helps explain why the social security bill is so high.

Benefits are also maintained longer; in Britain, even left-of-centre governments have feared being too generous with unemployment benefits, believing that if you pay people handsomely to be unemployed their incentives to take a job and support themselves are reduced.

This argument seems not to register with French administrations or indeed the French people.

Another economic argument, taken seriously across developed and indeed in many developing nations, is that high taxation of the corporate sector depresses investment and economic activity, and thus reduces opportunities for employment.

France’s regime of hefty business taxes takes no account of that, which might partly explain why the country went into the pandemic with unemployment at over 8%.

'In 2019, the last year before the pandemic, France raised €1.1 trillion in taxes; the UK, by comparison but with almost exactly the same population, raised just €852 billion'

The French spent 52.9% of their revenues on social services, including healthcare.

Businesses are exceptionally hard hit by taxation: They pay a sum equivalent to 10.1% of French GDP in taxes each year, and the rate of corporation tax in 2019 was 31% (with lower rates for small firms) compared to 19% in the UK.

A few on the right, in the Parti Républicain, take an orthodox ‘Anglo-Saxon’ view of their country’s economy, that the current tax and spend regime restricts economic activity and retards prosperity.

This point was made forcibly just before the pandemic by the gilets jaunes movement, resulting in some tax cuts in 2020 when President Macron realised he was losing touch with the French public.

For the previous year France had no longer had the highest tax burden in the EU (having been overtaken by Denmark), and these cuts helped maintain that situation.

However, partly because of the state’s generosity during the pandemic experts predict that it could regain that dubious honour next year.

One of the other economic arguments against running a large state, as France’s electorate votes to do, is that government departments are extremely bad at controlling spending in a way that private sector firms, with shareholders to appease, are not.

A huge proportion of public spending goes on state employees, notably fonctionnaires in the three branches of the civil service.

The only way to cut spending, and taxes, seriously is to move people off the public payroll – which accounts for 26.7% of France’s total Labour force (England in 2019 had 20.7%) – not on to benefits, where they become a drag on the taxpayer, but into a private sector job.

For those jobs to be created the private sector has to be given incentives to invest, but it is only worth expanding if it can find customers for its goods and services.

However, those who argue that France could benefit from such an approach are treated as eccentrics.

That is why the question of the country’s substantial burden of taxation has barely featured in the campaign for the presidential elections, now under two years away.

'Most French people like things as they are, even if it means the state decides how to spend most of the money they earn'

For a country that has liberté as one third of its motto, that is a considerable irony; but then perhaps the liberté to keep the lion’s share of what one earns is regarded as a necessary sacrifice to achieve égalité and fraternité.

However, M. Macron has seen the need to propitiate the apostles of individualism – in the form of the gilets jaunes – by cutting taxes, and he might feel the need to do so again.

He has issued an economic re-launch plan for the post-pandemic period, but it might quickly go out of date. Cutting taxes has been found in other countries to increase and not cut revenues, because it stimulates economic activity.

Should M. Macron argue for even higher taxes to pay for a bloated bureaucracy, it might provide a significant point of difference with a Républicain opponent who decides the inexorable rise cannot go any further. It is an argument that might yet happen.

Most herbes de Provence sold in shops are not authentically French
17 September 2021
More from Opinion
More from Connexion
Get news, views and information from France
Join the newsletter
Subscribe to The Connexion