What’s Your View?: A fair lunch out in France costs at least €13 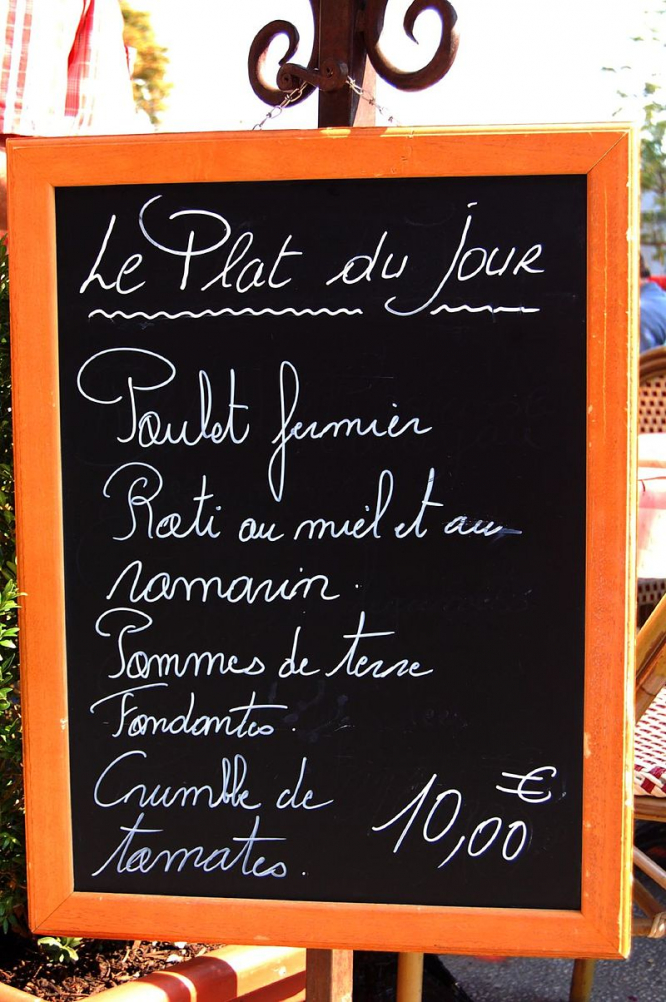 As a travel guide writer, I’m always interested in knowing about good restaurants - for work or pleasure. I don’t mean posh restaurants.

My definition of a good restaurant is not a prissy Michelin-starred place where a celebrity chef drizzles a pernickety sauce over next-to-no-food placed in the middle of an over-large plate.

What I want is good ordinary, straightforward home-cooking at a reasonable price. I am talking about a menu du jour, a formula that offers bon rapport qualité/prix – the closest you can get for saying ‘good value’ in French.

Is there such a thing anywhere in France still for less than €13? If there is, it won’t be in Paris or on the Riviera.

Meal prices vary according to the wealth and spending power of the region. I’m not talking about franchised fast food snacks – pizzas, burgers and the like, eaten on the hoof – but local cuisine, which you sit down to eat.

France has always had a tradition of decent, family-run restaurants where working people go to eat, some of them five days a week.

But I’m no snob: there is no reason why a self-service buffet in a shopping centre shouldn’t count as a proper restaurant.

For the sake of argument, let’s keep to restaurants in the old-fashioned sense. Our local, for example, is known as the Bar des Autobus because it is across the road from the bus stop.

You can usually identify this kind of restaurant from the outside by the number of cars and lorries parked there from midday to 13:30.

Alternatively, ask in a shop and they will tell you where everyone goes to eat round there.

Another sure-fire method of finding cheap restaurants is to consult the website relais-routiers.com, which has a clickable map.

This is mainly for the benefit of truckers looking for their next lunch stop but you don’t have to be one to eat in the places mentioned.

Les Routiers-recommended restaurants display the logo near the door – and, again, check out the number of lorries outside to gauge how good it is.

Inside an everyday restaurant, you get a paper tablecloth, if you get one at all, and there may be no concessions to prettiness or ambience.

It is the food that matters and fast service, so the diners can get back to work.

There won’t be a formal menu in a leatherette binder, or even much choice of what to eat.

The menu du jour is chalked on a blackboard and the waiter will reel off the various options when you order.

I should add, for the sake of full disclosure, that as a non-carnivore I find it hard to eat out in non-urban France but I am going to put my difficulties aside for the sake of asking this question: how much does a decent meal in France cost?

We are talking midday on a weekday. Restaurants try to make more money in the evening by serving only a la carte. And we are talking non-touristy areas.

The Café Royal on the square opposite the cathedral is likely to be a rip-off but there will be back-street restaurants not far away.

So, what should you pay? Restaurants can be a little devious in what is and is not included.

You can still eat a reduced meal for under a tenner but, as far as I know (and correct me if I am wrong), the least you will pay for a full three course meal with a half-carafe of rough wine and a cup of coffee afterwards will be €13 per person.

That’s equivalent to one-and-a-third hours’ work on the minimum wage.

If you want a Michelin star, or organic locally-sourced produce, that will rise to €20.

I doubt if any restaurateur turns a huge profit on such menus.

The price is controlled by the cost of ingredients, labour costs and what people are willing to pay.

Cheap? That depends on your budget. If the food is reliably good, and the place reasonably relaxing, then it’s not too bad.

The 10 most expensive cities to park your car in France
16 September 2021
More from Opinion
More from Connexion
Get news, views and information from France
Join the newsletter
Subscribe to The Connexion