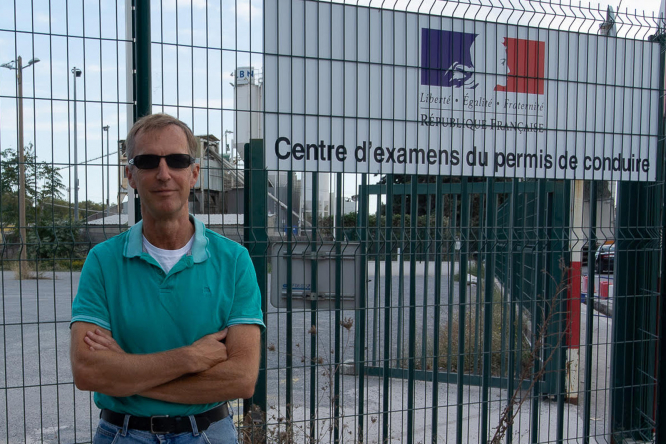 'I can imagine that for young drivers it is even more disturbing' says Edward Sheen Pic: Courtesy of Edward Sheen

Writer Edward Sheen, 58, who has 40 years of experience behind the wheel, said nothing prepared him for the ordeal, which left him “rattled” and “chastened”.

He moved to Saint-Jeannet on the French Riviera in 2000 and applied to change his licence for a French one in January 2019, post-Brexit.

After numerous setbacks, he decided to take control of the situation and obtain a French licence from scratch.

He studied hard to pass the online theory test (code de la route) – an exam consisting of 40 questions which he likened to “mastering a crossword”. Little did he know that the practical element (examen du permis de conduire) would be even more brutal.

'The driving exam really made my head spin, and I am a grown man'

“I can imagine that for young drivers it is even more disturbing and it is not surprising that lots fail on their first attempt. I think it is important to tell people what to expect, as it really took me by surprise,” Mr Sheen told Connexion.

He was summoned by the prefect of Alpes-Maritimes to take the exam at a testing centre on the outskirts of Nice. Unlike the driving test Mr Sheen took on the Isle of Man in 1980, his instructor sat in the back of the car throughout the 32-minute test – chatting loudly with the examiner.

“I had been warned that the examiner would talk to my instructor. What I had not appreciated was the sheer level of noise that would be generated by the discussion.

“Normally, I would have said something. Driving these roads is stressful enough at the best of times and I could have done without the chatter.”

Mr Sheen said it was not always clear where he was meant to be driving, which did not help

“The main difficulty with the discussion was working out when the examiner was addressing me. Both front windows were also wide open due to Covid regulations, plus masks muffle the voice.”

At one stage, Mr Sheen resorted to putting his arm out of the car, to signal that he was joining a different lane in queues of traffic common on the roads around Nice.

“The examiner did not seem too put out by what I was doing. He carried on chatting. I was subsequently told this was a good sign.”

However, the noise that greeted him on the last roundabout of the test was more worrying. “It was on the main road going into Nice. I pulled out, but the view of the road coming in from the right was blocked by a barrier.

“The examiner erupted. It was a well-rehearsed sound. A sound made to make you feel like you have left several bodies lying on the road.

“At first, I was genuinely puzzled. I had the right of way. But, as was made abundantly clear, I had not looked to see if someone was coming on to the roundabout.”

Mr Sheen said the “loud Gallic rebuff ” left him seriously rattled and unsure whether he would pass. The exam is scored out of 31, with drivers having to get a minimum of 20 to pass. “I had no gauge to measure it against. Suddenly I kept asking myself ‘Have I done enough?’.”

“I had assumed I would be told on the spot,” said Mr Sheen.

“Well, that is how it had indeed been done several years ago. Not now, though.

“Too many candidates, unhappy at being failed, were venting their feelings by attacking their examiners.

He need not have worried.

“I logged on to the Sécurité Routière website. I scored 28, with just two points docked: one for the takingon- board information category and another concerning communicating with other road users. I got one bonus point for courtoisie.

“Relief flooded through me, but I had been too rattled to feel pleased.”

According to the most recent government figures, only 59.8% of the 977,946 candidates who sat their driving test in 2019 passed the first time round.

driving licence
driving
More from Your views
More from Connexion

Missions Locales: Unemployed youngsters in France thrown a lifeline
2 December 2021
More from Your views
More from Connexion
Get news, views and information from France
Join the newsletter
Subscribe to The Connexion