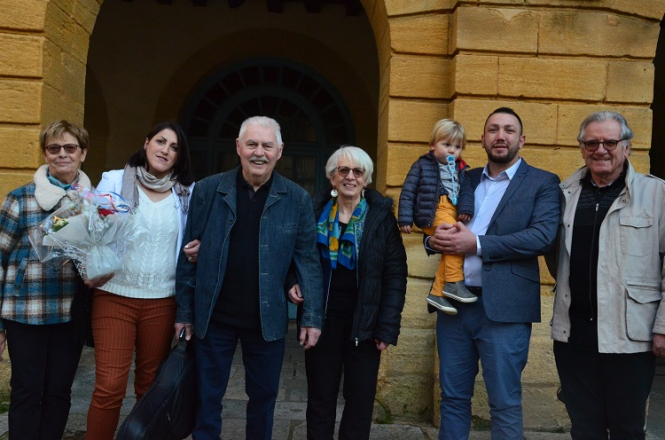 They helped organise a civil baptism for the family’s youngest child at the mairie in Sarlat, Dordogne, with maire Jean-Jacques de Peretti, who is also backing the family.

They came to France three years ago with their sons Lian, five, and Ledion, three. Omer, 20 months, was born in France.

Mr Zaïri, a builder, and his wife, a nursing auxiliary, were fleeing violent aggression.

Mr Zaïri was constantly threatened with violence and said: “I decided we had to leave the country. My wife’s brother is a policeman and he could have killed me and got rid of the evidence.” Marie-Laure Guiradel first made contact with the family and said: “I was told about their arrival by a friend who knew I was willing to help migrant families.

“I made a cake and went to introduce myself.

“I quickly realised they had no financial support and were not allowed to work. I asked another couple to join in, but we needed more help.

“Now we are a big group and as well as giving them money, we also take them to official appointments and teach them French.”

The family’s first application for asylum was rejected.

Patrick Sardant from Udasti, which helps migrants with their paperwork, said they had a good case but were ill-advised when they arrived.

Mr Zaïri has been given an expulsion order, though it has not been implemented yet.

Mr Sardant said: “Having a group like this is a huge help. I have never seen one as big.”

Have your group featured: The Connexion regularly features news and events from community groups all over France.

We would be pleased to publicise your association (non-commercial) – it’s a great way to bring in members and it is free! Email news@connexionfrance.com

community
refugees
solidarity
More from Your News
More from Connexion