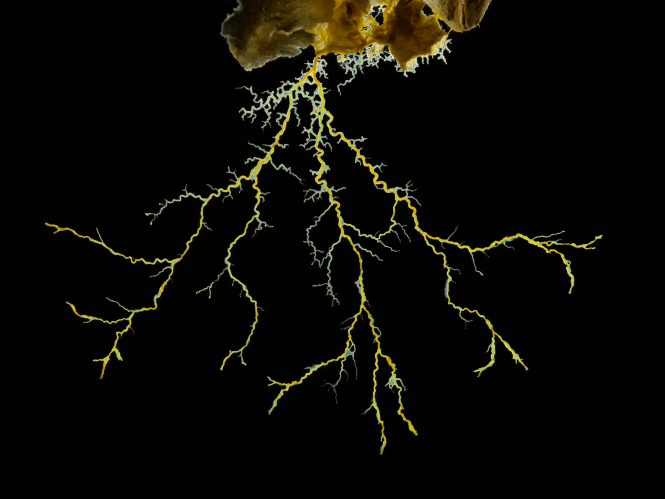 A photo of the blob forming a tubular network of protoplasmic strands in search of food Pic: Ernie Cooper / Shutterstock

A new research project is seeking 10,000 volunteers in France to study ‘the blob’ – a brainless, eyeless, single-celled organism with more than 700 sex parts, which has previously been a star attraction at Paris Zoo.

In the study, run by the Centre national de la recherche scientifique (CNRS), volunteers will be given their own blob and a related species to look after.

They will have to feed the two specimens, expose them to heat and document their growth for one to four weeks, to help understand how the blob may react to climate change.

During the study different temperatures and duration of exposure to heat will simulate heat waves.

In a statement the CNRS said the study would “require around one hour of work per day”, with volunteers also needing to take a daily photo.

It described the scale of the study as “unprecedented” as so many volunteers are required.

People who wish to volunteer for the project can sign up online before November 12. The study is expected to begin in spring 2022, with the results published in summer or winter the same year.

This is not the first experiment to be run using the blob this year – in August 2021 four samples were sent to space for experimentation.

What is the blob?

The blob (scientific name physarum polycephalum) first appeared on earth before the dinosaurs.

It is a yellow-coloured single cell organism that has multiple nuclei meaning it can multiply at will, and heal itself within minutes if cut in half.

Despite having no limbs, mouth or stomach, it can move and eat and even though it does not have a brain, it has problem solving and information transmitting abilities.

Scientists have ruled out the blob being a plant but are unsure whether to classify it as a fungus or an animal.

It has been described as looking like a mushroom, but also has 720 sex parts.

In 2019 the blob went been on display in Paris Zoo, in the bois de Vincennes.

Beware: A “blob” is arriving at Paris zoo this weekend