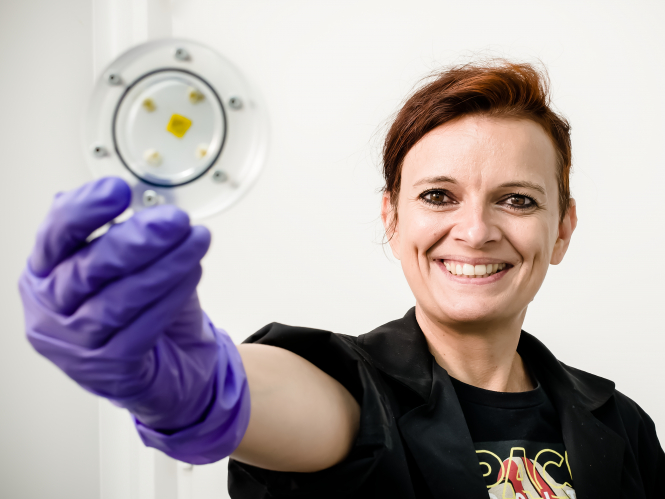 Dr Audrey Dussutour shows a blob in a box which is now part of an experiment on the International Space Station Pic: David VILLA ScienceImage, CBI CRCA CNES CNRS Photothèque

Some of the planet’s most unearthly organisms were sent yesterday (August 10) to the International Space Station (ISS) in a pioneering experiment with French astronaut Thomas Pesquet and more than 3,500 schools.

The experiments involve four ‘blobs’ – single-celled organisms visible to the naked eye – that have astonished scientists by their ability to learn, communicate and reverse ageing.

Audrey Dussutour, research director at the CNRS Animal Cognition Research centre in Toulouse, is leading the work being done by the schools and, 400km overhead, in the ISS.

Once classed as fungus, blobs (or slime mould) are now seen as a different species entirely, not plant, animal, or fungus.

There are around 1,000 known different varieties but possibly thousands more. They like moist and dark conditions such as woodland and may lie dormant for years until cond-itions combine to wake them.

Gardeners may know one that appears after heavy rain – it looks like lumps of yellow scrambled egg and is, unattractively, known as ‘dog vomit’.

The tests involve Physarum polycephalum, which have no mouth but consume moss in the wild and are fed oat flakes in the lab. They move by stretching their membrane and studies show that, even without a brain, they have a primitive form of intelligence.

Experiments are planned for October

“I am in touch with teachers to show the different tests they can undertake with blobs, not only those that will happen in space.

“There is a small risk the ISS blobs will not wake up and Thomas Pesquet’s full schedule means he can only allocate them a limited amount of time, but the schools can help find the foods they eat, even sharing their lunch with them.”

She is thrilled that so many are involved: “It is a unique opportunity to amass a huge amount of data from 10,000 blobs, as each school will have about three to look after. I aim to produce a research paper with the children’s findings.

“It may even encourage some to become researchers.”

Her tests found blobs have amazing capacities, challenging existing theories that only animals with a nervous system can show intelligence. “We did not think this could exist in a one-cell organism. It indicates that in evolution intelligence probably existed before species developed a nervous system.

“We found blobs can learn, navigate a maze, and have a memory. Put them in a dormant state and wake them a year later and they ‘remember’ what they learned before they ‘slept’. As plants, too, can learn, it raises the question of whether all living organisms have some form of intelligence.

“Blobs can also pass on knowledge. If they recognise a risk such as a source of light (they only like the dark) they warn other blobs not to go there. They can also communicate the presence of poison in a food.”

One exceptional capacity could be used: regeneration.

“A blob will show traces of ‘old age’ as it develops but after entering into a dormant state, these will disappear and it will wake up ‘young’ again.

“We do not yet know the mechanisms which make this possible, but it has huge potential in the study and application of cell regeneration.”

Her work is popular, with 13,000 followers on Facebook, and you can buy blobs on the blobshop.fr site. “Even Ehpad retirement homes are interested in nurturing blobs.”

You can also find your own blobs in the wild.

“Take damp twigs home and keep them humid and in the dark. It may take a month but hopefully the near-invisible dormant blobs will wake so you see them.”

Beware: A 'blob' is arriving at Paris zoo

science
space
More from Science and Technology
More from Connexion

Most herbes de Provence sold in shops are not authentically French
17 September 2021
More from Science and Technology
More from Connexion
Get news, views and information from France
Join the newsletter
Subscribe to The Connexion