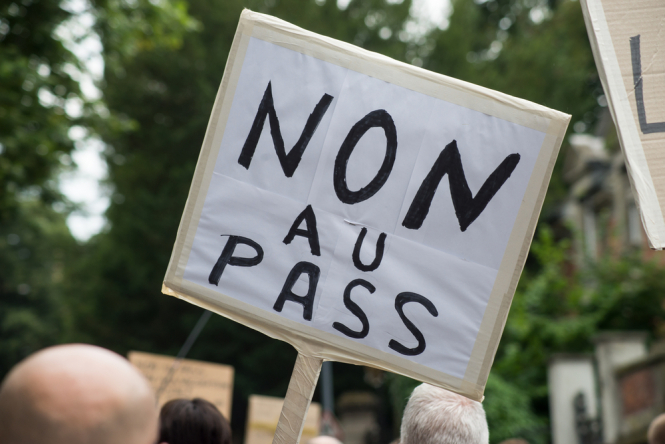 More than 100,000 people turned out in protest this weekend, both against the new health pass regulations and President Macron’s controversial words Pic: NeydtStock / Shutterstock

More than 100,000 people across France yesterday (January 8) protested against the health pass and government plans to turn it into a ‘vaccine pass’, in a new surge for the anti-pass movement.

There were 18,000 people in Paris, across three separate marches, and 105,200 people nationwide, according to Ministry of Interior figures.

The numbers mark a significant rise compared to before Christmas, when 25,500 people turned out to protest.

This Saturday was the 26th consecutive weekend of marches.

There were some small clashes in Paris, causing three light injuries among law enforcement, and 24 arrests and seven small injuries across the rest of France.

In Montpellier, protesters attempted to scale fences at the prefecture in Hérault, and law enforcement responded with tear gas.

Banners included slogans such as “no digital pass, no injections”; and “pissed off” citizens, in reference to President Emmanuel Macron’s controversial words about wanting to “piss off” the non-vaccinated.

In Lille, there were shouts of “wake up” from protesters.

Police officers marched too, with a banner that read: “Angry police”, with a message that they did not want to “piss off” citizens who “have committed no infractions”.

Protesters called for a march in Mont-Saint-Michel, despite the Manche prefecture having banned any action. After authorities stated that they had not received authorisation for the march, it was cancelled.

The rise in numbers was expected following Mr Macron’s words, and the government’s plans to change the health pass to a vaccine pass.

Read more: Emmanuel Macron admits he wants to 'piss off' the non-vaccinated

French MPs have now definitively adopted a bill that will see the Covid health pass transform into a vaccine pass within weeks.

The planned vaccine pass, showing that someone is fully vaccinated against Covid, will be required to enter the majority of public places, including cafes, restaurants, long-distance transport services, cinemas, museums, etc.

If adopted, this would replace the current health pass, which allows people to show a negative Covid test to enter the public places which fall under the scheme.