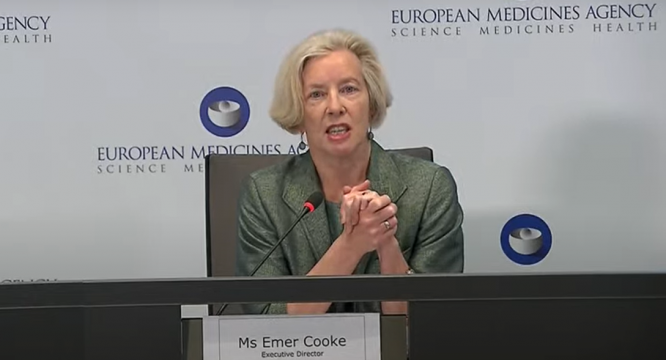 Emer Cooke, the executive director of EMA, speaks during a press conference on March 18 where she announced the conclusions of the agency's intensive review into the link between thromboembolic events and AstraZeneca's Covid-19 vaccine
By Thomas Brent

The announcement comes after France temporarily suspended use of the vaccine on Monday (March 15) due to a small number of reports of blood clots in people who had received the vaccination. Twelve other EU countries, including Germany, Italy and Spain, also suspended the vaccine.

“The committee has come to a clear scientific conclusion. This is a safe and effective vaccine,” Emer Cooke, the executive director of EMA, said during a press conference on Thursday (March 18).

“Its benefits of protecting people from Covid-19...outweigh the possible risks.

“The committee also concluded that the vaccine is not associated with an increase in the overall risk of thromboembolic events or blood clots,” she said.

Ms Cooke stated that during the review process a small number of cases of rare and unusual but very serious clotting disorders were identified.

She said that based on available evidence, EMA still cannot rule out “definitively” a link between these cases and the vaccine.

The Committee has recommended including this information on the product information and has stressed the importance of closely monitoring all reported side effects noticed after vaccination.

“We are also launching additional investigations to understand more about these rare cases and we are conducting targeted observation studies,” she said.

French Prime Minister Jean Castex is set to give a press briefing on Covid-19 tonight at 19:00. It is expected that he will comment on the EMA’s conclusions.

Ms Cooke said, “the scientific conclusions adopted today provide member states with the information they need to take an informed decision regarding the use of the AstraZeneca vaccine in their vaccination campaigns”.

“I would like to highlight that the situation like the one we have just seen here is not unexpected. When you vaccinate millions of people it is inevitable that rare or serious instances of illnesses will occur in the time immediately following vaccination.”

In France, the AstraZeneca vaccine is one of three currently being deployed. It accounts for more than one quarter of all vaccines given.

Mr Castex is planning to get vaccinated on Friday with the AstraZeneca vaccine, newspaper Le Figaro reported. He does not fall into the priority category to receive the vaccine yet as he is 55 years old and does not have existing health conditions. According to Le Figaro, he hopes getting vaccinating will encourage others to do the same.

Had AstraZeneca jab in France? No need to worry, say experts

France AstraZeneca pause: How key is vaccine to campaign?