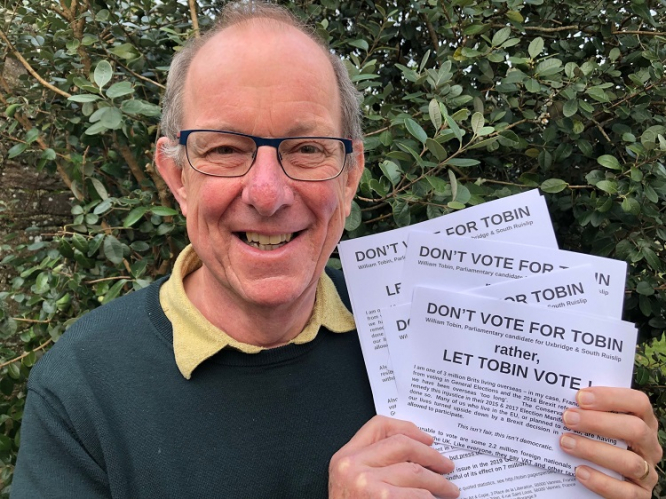 A retired physics lecturer from Brittany is standing in Boris Johnson’s constituency in the general election – but does not want any votes.

William Tobin, 66, is standing as an independent in Uxbridge and South Ruislip to highlight what he sees as the injustice of himself and millions of other Britons abroad being denied an election vote due to being overseas for more than 15 years.

His slogan is “Don’t vote for Tobin – let Tobin vote”.

He decided to stand to raise awareness of the “15-year rule”, which the 2015 and 2017 Conservative manifestos pledged to remove, after he found that he has the right to stand despite losing his vote.

He also opposes Brexit because of the loss of rights for Britons abroad.

“I hope to be noticed in the debate in the UK as well as by  Britons abroad, many of whom already feel angry about this.”

He obtained 10 support signatures from the constituency after door-knocking and also needed a designated constituency office, which will be the home of an artist friend who lives there.

He does not want people to vote for him but to press other candidates to end what he sees as the wrong of the 15-year rule.

“I think that democratic rights are important,” he said.

“It would mean me not being able to vote for my local council or in European elections.

“I also worry about British pensions not being uprated, the fact I would lose my right to move to live near my daughters if one of them moves to Spain, and the fact that some Britons may struggle to prove their right to obtain a carte de séjour because they live modestly.

“My goal is to get zero votes. Every vote I get is one that could have been used to stop Brexit.” Overseas voting was brought in in 1985, at five years, increased to 20, then reduced to 15 under Labour. Lifetime voting was listed in the 2015 Queen’s Speech.

A bill in favour of it was “talked out” by a Tory MP this year.

The European Commission called the 15-year rule “tantamount to punishing citizens for exercising their free movement”.

Mr Tobin has a crowdfunder to cover his expenses (crowdfunder.co.uk/dontvotetobin)   which he estimates at €2,500. It has raised more than £800.

DontVoteTobin from William Tobin on Vimeo.

He said: “A Connexion article online helped raise money, which enables me to have a flyer printed which the Royal Mail will distribute to all 47,110 households in the constituency.

“Someone from the3million campaign [for EU citizens living abroad in the UK] has also helped and it is now taking off.”

For more on voting, see the British Ambassador’s column here.