The UK is still part of our European family, say MEPs 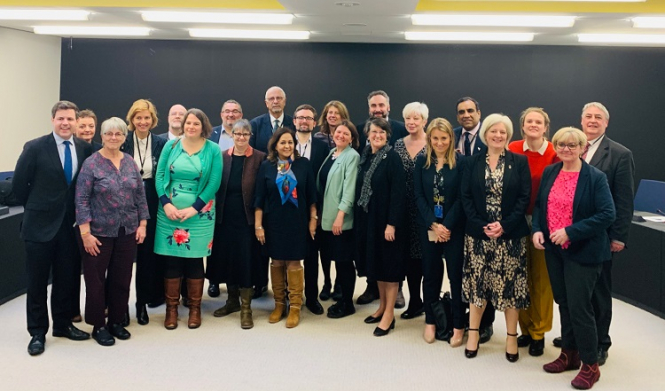 A UK Friendship Group set up at the European Parliament in December already has 75 members and has decided on its first action: to sing Auld Lang Syne after the Withdrawal Agreement vote takes place.

Founder and German MEP Terry Reintke said: “We will need some strong singers, but I hope it happens.

“We should all stand up, sing and be sad together.

“When people say goodbye, they need rituals and space to feel their emotions. In politics, we are often very serious and don’t leave space for that.”

She said the vote on January 29 will be “difficult” for many but is likely to be carried.

Following the resolution the MEPs recently passed on citizens’ rights (see ‘Treat Britons in EU well’ say MEPs) the group aims to keep a close eye on how the WA’s rights provisions are implemented.

“And we will fight for the future – so it brings us some better news,” Ms Reintke said.

The group’s first meeting in Strasbourg in January included British MEPs, who were preparing to sit in the Parliament in Brussels for the last time.

The group wants to keep close links with them, as well as with other pro-Europeans in the UK. Ms Reintke said: “I have felt at home in the UK ever since we travelled over on the hovercraft when I was six.”

She said she spent half a school year in Kent when she was 16 and later did an Erasmus year studying in Edinburgh, making many British friends.

“I felt very sad and shocked about Brexit, as a lot of people had told me not to worry and that it would be fine,” she said.

“Now I wonder if we non-British Europeans should have come to Britain to explain that the EU is about so much more than the stereotypes of ‘Eurocrats’ sitting in Brussels who don’t know about real life. But now we must look ahead.”

Ms Reintke is pleased many British MEPs signed up to stay in contact with the group.

“We want it to be a platform for them, as well as for remaining UK-friendly and pro-European MEPs, and we had a lot of very positive reaction to that.There is also a huge pro-European movement in the UK now and we hope to stay in contact with the organisations and give them an entry point to the European institutions.”

In the next meeting, the group aims, if possible, to have representatives from all EU states and political groups, she said.

The UK potentially rejoining will be one focus of the group.

“Whatever happens, it will be best to have close ties and not to diverge a lot, but I hope one day British MEPs will be elected again,” she said. “It will be a long-term thing – there will be no referendum to rejoin next year but, to me, the UK is still a part of the Euro­pean family.”

As for the idea of an “associate EU citizenship” for Britons who feel European, championed by some MEPs, she said this would be a “difficult constitutional matter” and she does not want to raise hopes that it may be available in the short term.

“But we will look deeper into how it could work,” she said.

Prof AC Grayling, who chairs a co-ordinating group for UK Remain organisations, told Connexion he is pleased about the group. “We must keep close links between British Europeans and all our friends, neighbours and partners across the EU because we in Britain will rejoin one day, and I think sooner than many expect.”

British MEP Seb Dance wrote an open letter to EU chiefs, saying Britain is “taking a sabbatical”. He invited people to sign it at tinyurl.com/tkurld2.