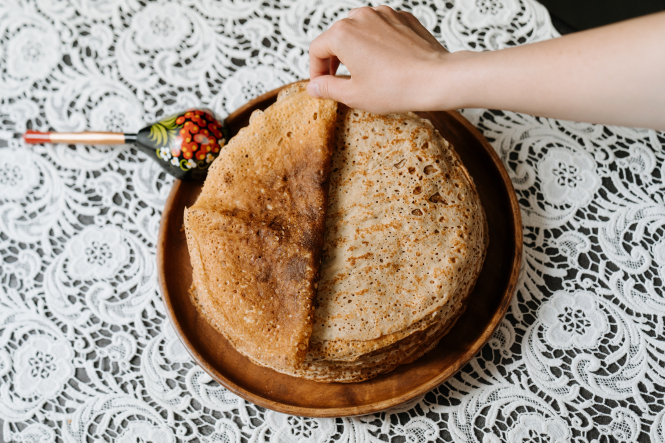 Many regions in France have their own traditional take on the crêpe, varying in colour, texture and filling and all are especially enjoyed at Chandeleur
By Holly Howard

This Christian festival - known as “Candlemas” in English - is celebrated on February 2, traditionally the 40th day of the Christmas-Epiphany season. It commemorates the “Presentation of Jesus at The Temple” with church candle processions at mass on this day. The name of the festival itself comes from the word “chandelle” (“candle”).

Also known as the “day of crêpes” in France, the celebration is said to date to Roman times and Pope Gelasius I, who had pancakes distributed to pilgrims arriving in Rome for the festival.

Crêpes at Chandeleur are supposed to be made with the last of the flour from the previous harvest. The myth goes that if the pancakes were not made on Candlemas, the wheat would spoil the next year: Si point ne veut de blé charbonneux, mange des crêpes à la Chandeleur.

Crêpes are one of France’s national dishes and are enjoyed year-round, though especially at Chandeleur.

Many regions have their own traditional take on the crêpe, here we explore the most common five.

La crêpe: The original from Brittany

Crêpes in France date to around the thirteenth century. A popular myth is that when buckwheat was first introduced to the Brittany area around this time, a housewife accidentally made the first crêpe by spilling some buckwheat porridge onto her flat stove.

Today in Brittany, buckwheat pancakes (galettes) are usually served up as a savoury dish whilst wheat pancakes (crêpes) are the sweet treat. Both are traditionally served with local cider in a bolée (clay cup).

Le bourriol is a very regional dish that is eaten all year round. So regional, in fact, that it is not particularly well-known in France outside Auvergne. Bourriol was the food of Auvergne farmers who ate it plain with a dab of butter and for a long time instead of bread due to its thickness.

It is made from very few ingredients, the big difference between bourriol and other crêpe recipes is that it has whey as an ingredient.

Today, burriol is often filled with jam for a sweet kick or garnished with meat, such as local ham.

La socca: From Nice with chickpeas

Originally, socca was a dish for the poor and morning workers such as the Nice fishermen thanks to it being a very ‘snackable’ dish and cheap to make.

This south of France crêpe is made from chickpea flour and olive oil and is best eaten hot. Socca is often served at apéro and is a popular dish at markets as it is considered a healthy snack thanks to the nutritional chickpeas.

L’eierküeche is a thick and crispy pancake that is most popularly served as a savoury and hearty dish with sautéed potatoes and a green salad.

Traditionally, l’eierküeche used to be served on Fridays as a small, meat-free meal on “Friday Fast”.

La ficelle picarde was created in Amiens in the 1950s. Chef Marcel Lefebvre prepared a new crêpe dish to impress local aristocracy at an exhibition fair lunch and it has been a regional speciality ever since.

The traditional ficelle picarde is a baked pancake, stuffed with mushrooms, cream and ham. Many variations now exist, a béchamel sauce often replaces the fresh cream for example, served up alongside the original.