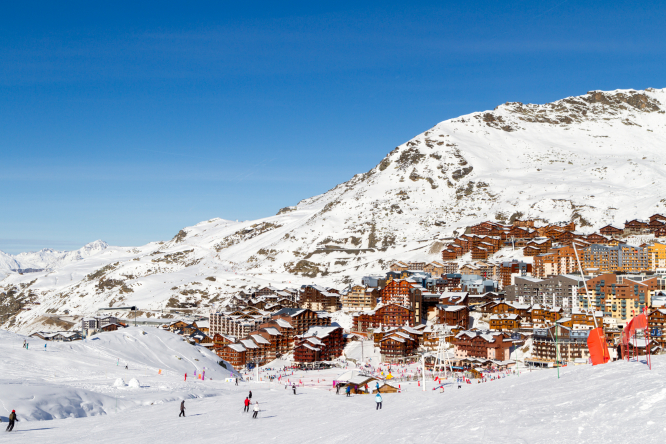 Ski resorts like this one (Val Thorens) in France should be back up and running in months. Pic: Regesha Iryna / Shutterstock

Obligatory health passes are likely to be introduced for ski holidays in France this winter in a bid to provide reassurance to those booking breaks and local residents.

Junior Tourism Minister, Jean-Baptiste Lemoyne, is due to discuss the options with mountain business professionals today (September 20). For the last two years the ski lifts in French stations have been closed or limited to professionals, schools and clubs due to the pandemic.

“I don’t see why we wouldn’t have a winter season. We’ve opened the nightclubs and I don’t see why we couldn’t reopen the chair lifts and telecabines," he told France Inter at the world tourism forum in Evora (Portugal) last week.

Over the border in Switzerland, the ‘Covid certificate’, equivalent to the French ‘passe sanitaire’, is already required to book ski lift passes in the Swiss resort of Fideriser Heuberge when it opens.

Mr Lemoyne looks set to follow suit and implement something similar in France.

"The health pass has demonstrated its effectiveness because it allows you to enjoy activities in complete safety. This is very important, because there is public demand for this kind of reassurance and it has shown that it could also be combined with maintaining revenue," he added.

Mountain professionals and elected officials are currently looking at whether it will be easier to present passes when purchasing packages, rather than showing them at hotels and clubs..

While some French ski resorts have announced plans to reopen from late November, the majority will not do so until December.

Ski specialist Peak Retreats has compiled a handy quick reference list to when specific ski resorts are opening and closing in France.

Franck Gervais, CEO of Pierre et Vacances, owner of 66 hotels in winter ski resorts in France, said introducing a health pass to resorts would be easy to implement.

"We tested it at Center Parcs this summer and the process took around 90 seconds for a family of four," he told France Inter.

An alternative system, similar to that implemented by train company SNCF, could involve the use of coloured bracelets to identify skiers who have already successfully shown their health pass, suggested Alexandre Maulin, president of professional ski operator group Domaines skiable de France.

Read more: France’s health pass: the rules for TGVs and other train journeys

Prime Minister Jean Castex is due to ask for an extension to the law on health passes, which could see the passes kept in place beyond November 15.

If implemented, the bill would be presented on October 13 in a cabinet meeting with le Conseil des Ministres, before being debated in parliament, according to France Info.

However, Emmanuel Macron has hinted at some health rules being lifted in the coming weeks.

In an interview with Le Parisien, Health Minister Olivier Véran said that if the situation continued to improve, "the restrictions could be gradually eased".

1 day ago
3
Which products are – or could be – hit by stock shortages in France?

18 hours ago
5
France considers petrol cheques: What are they are, who would benefit?