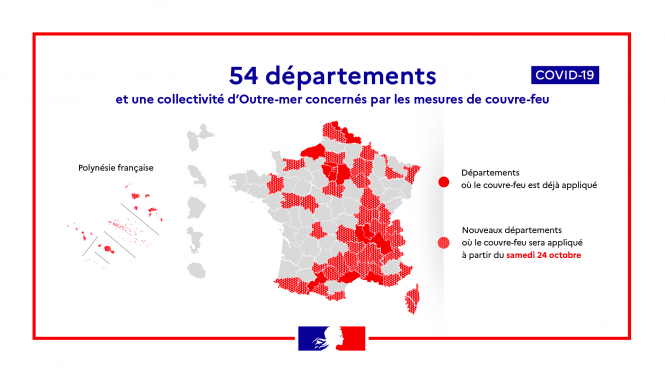 A 21:00 curfew rule will apply to the majority of France from October 24
By Liv Rowland

Most of the country is to be placed on a 21:00 to 6:00 curfew starting from midnight on Friday, the prime minister has said.

It means that everyone, apart from for certain set exceptions, will be told to be at home between those times in a total of 54 departments of France. An estimated 46 million people are affected and the curfew is expected to last at least six weeks.

Up to now curfews were in place in the eight departments of Ile-de-France and eight other large cities. This will now be extended across the 16 departments concerned and in another 38.

Mr Castex said in a televised announcement: “The extension of the curfew measure to numerous new departments is a preventative measure that I take full responsibility for. The virus is accelerating.”

He added: “The coming weeks are going to be tough, our hospital services will be facing a lot of pressure and the number of deaths is going to continue to go up.”

Speaking afterwards, Health Minister Olivier Véran said: “The figures [of new cases] are doubling every fortnight despite all the efforts. Without new measures in another two weeks there will be more than 50,000 new cases a day.”

The departments concerned are: