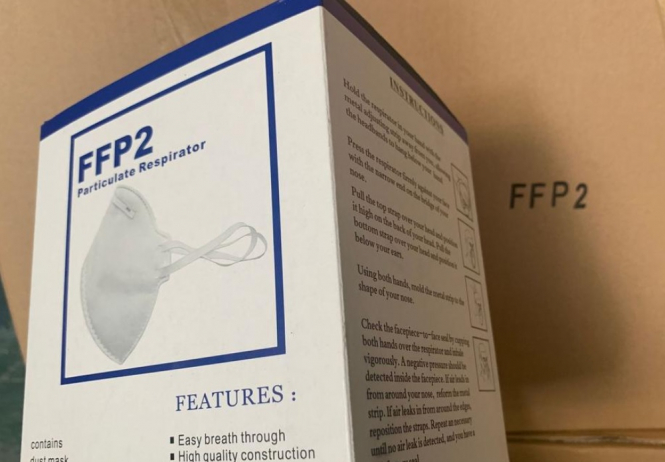 The FFP2 masks such as this are only authorised for sale and use to people with symptoms, or medical staff
By Connexion journalist

In Montpellier (Hérault, Occitanie), a theft of 12,000 surgical masks from a hospital was reported. The perpetrators risk up to three years in prison.

In addition, anyone found to be selling hospital equipment illegally for their own gain risks three years in prison and a fine of up to €45,000.

On March 7, three men in Maisons-Alfort (Val-de-Marne, Île-de-France) were questioned in connection with the alleged illegal reselling of more than 40,000 expired masks.

In the Oise (Hauts-de-France), one man was arrested for allegedly selling expired masks and sanitiser gel on classified ads website Le Bon Coin.

On Wednesday March 18, almost 1,000 surgical masks were seized from a pharmacy that was selling them illegally to customers for €10 apiece. A total of 981 masks were seized, and the manager was fined under the decree of March 13, 2020.

This states that the sale of this kind of mask (of the type FFP2) is banned except for use by healthcare workers or ill people.

Yesterday (Thursday March 19), a pharmacist in Marseille was arrested for the alleged illegal sale of surgical masks to clients; while in Montpellier, an inquiry has been opened into the reported theft of 12,500 masks from the CHU (university hospital; centre hospitalier universitaire).

On the same day, in Paris, police seized 2,580 masks from a delicatessen and pharmacy, which were authorised for use by medical staff only. The pharmacy had more than 2,000 masks.

The two sites were sanctioned for non-respect of the March 13 decree.

Frédéric Adnet, head of emergency services at the Avicenne hospital (Seine-Saint-Denis, Île-de-France), said: “Some masks can protect against saliva or sputum. The effectiveness is comparable to that of a surgical mask, but there are no quality controls.

“Some [being sold illegally] appear to have a filter valve [particulate respirator], but the valve is completely fake.”

Yesterday, Prime Minister Edouard Philippe said that the pandemic had “revealed the most beautiful aspects of humanity as well as the darkest”.