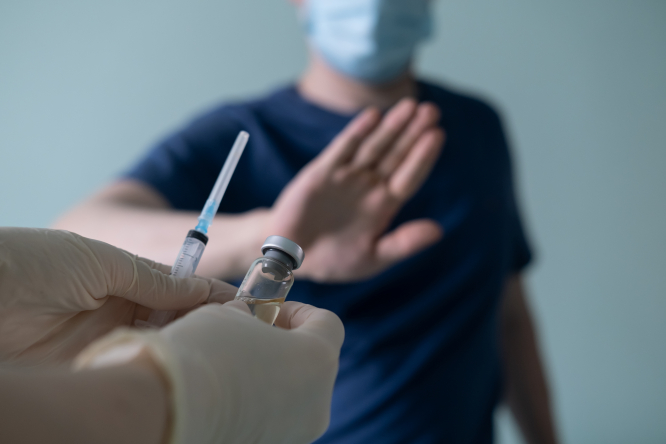 60% of people in France would be in favour of a lockdown for only non-vaccinated people, a new poll has suggested Pic: Anishka Rozhkova / Shutterstock

Yet so far, a lockdown for only non-vaccinated people does not appear likely in France.

Read more: Covid: Is a lockdown for unvaccinated people a possibility in France?

The poll was part of an Opinion 2022 study by Elabe for BFMTV and L’Express, in partnership with SFR, through which 1,001 people completed an online survey between November 16 and 17.

It found that 60% of people polled would be in favour of a non-vaccinated-only lockdown.

Support rose to 63% among the vaccinated but many non vaccinated people were also in favour - with 40% of them telling the poll they would support such a lockdown.

More than half (54%) of those questioned felt that the pandemic is far from over and will restart again in the next few weeks. People aged 65 and over are anticipating a greater return of the virus (66%) compared to people aged 18-24 (55%).

However, more than three in five (61%) said they do not think there will be another national lockdown in the next few weeks.

It comes as Covid cases are rising sharply in France, with 19,778 new cases reported on Tuesday, November 16, and 20,294 yesterday on Wednesday, November 17. This is almost double the daily average reported the week prior (11,000).

In Austria, Germany, the Netherlands, and Norway, restrictions - including lockdowns in some areas - have been imposed in recent days.

But on November 16, French government spokesperson Gabriel Attal said: “Absolutely no lockdowns are planned today, either in the short-term or long-term.”

Yet, he admitted that he could not rule the measure out completely. He said: “What 18 months of health crisis have taught me is that we must never rule anything out, on principle.”

And while both right-wing presidential election candidates Xavier Bertrand and Valérie Pécresse said in a debate last week that they would be in favour of a lockdown for non-vaccinated people, Economy Minister Bruno Le Maire told BFMTV on November 14 that the country “must absolutely avoid a new lockdown”.

Similarly, LREM president and former Interior Minister Christophe Castaner told the Assemblée nationale that “all hypotheses are still on the table, as we are facing up to a virus that can surprise us and is still surprising us”.

It comes as Professor Delfraissy warned that the population may need regular vaccines against Covid, and “did not rule out the possibility that, if this virus becomes endemic, we could end up with a regular vaccine every year, like the flu.”

Similarly, the government has called for establishments to step up requests for the health pass in a bid to curb spreading cases.

In Morbihan, where cases are especially high, the gendarmerie has been carrying out extra checks in restaurants to ensure compliance in a bid to discover why the virus is spreading so fast in the area.

Covid: Is a lockdown for unvaccinated people a possibility in France?