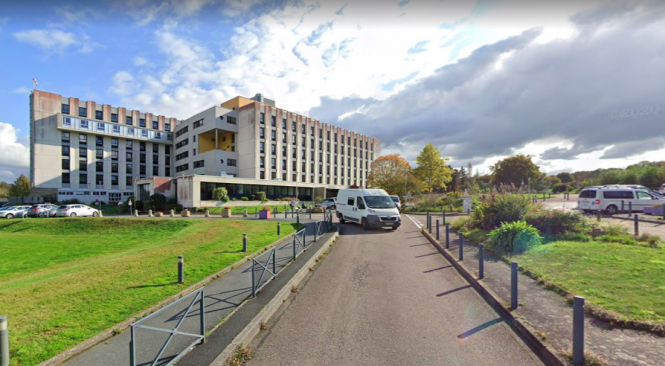 Eight cases of the new variant have been found at a hospital in Lannion in Côtes-d’Armor Pic: @W38777Y / wnews / Twitter

The variant was first identified in a cluster of cases in a hospital in Lannion, Côtes-d’Armor.

The DGS said in a statement that initial analysis of the new variant “had not found that it shows signs of increased danger or transmissibility” compared with the original virus.

Research is underway to see whether or not people who have already had Covid-19 are immune to the new variant, and how it responds to existing vaccines.

The new variant is one of thousands of naturally occurring strains that are currently in circulation. Only a small number of these are found to be significantly more dangerous or transmissible than the original virus.

In a second statement for medical workers, the DGS said that “evaluations were ongoing” to see if there was a “problem of recognition” - meaning that the new variant might go undetected by some Covid tests.

It wrote: “Multiple patients with typical symptoms that suggested infection with the Covid-19 virus got negative results from nasal PCR tests.”

As of March 13, eight people have been found to be carrying the new variant out of 79 people in the Lannion cluster.

The new variant was identified because the eight patients clearly had symptoms of the Covid-19 virus, but received negative results when they took PCR tests.

This led scientists to run molecular analyses on their tests, during which they found evidence of a new variant.

Variant to be monitored

There are currently three Covid variants considered worrying by health authorities because they are more transmissible or cause serious forms of the Covid-19 virus: the UK, South African and Brazilian variants.

The variant in Brittany has been classified in a secondary category – along with thousands of other variants which occur naturally – as one “to monitor”.

This means it has characteristics which could be problematic, but is currently circulating on a very small scale.

Only a small number of these variants go on to pose more risk than the original virus.

A monitoring zone has been set up in Côtes-d’Armor and neighbouring department Finistère to track the variant.

Local health body l'Agence régionale de santé (ARS) is to speed up vaccination in the region, and it has advised people in areas concerned to ensure they maintain barrier gestures and limit social gatherings.

14 hours ago
2
Coronavirus: Daily updates on the situation in France

5 days ago
4
Covid France: Changing rules for testing and quarantine this summer