Covid: Patients in intensive care in France are younger 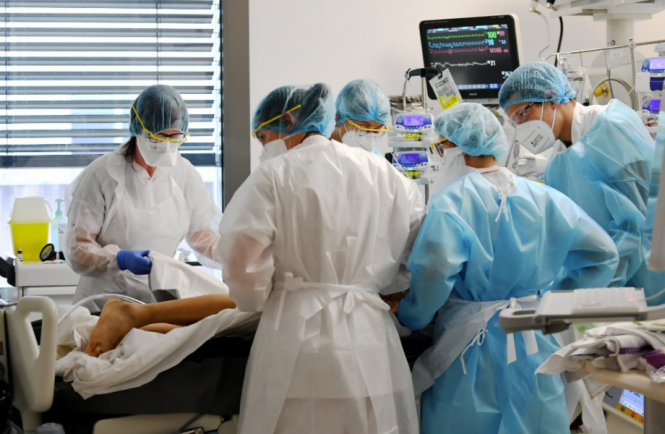 The average age of people in intensive care with Covid-19 in France is decreasing, in what Paris hospital group AP-HP has described as a “significant trend”.

This comes as admissions to intensive care units in France are rising overall.

There are currently 4,651 Covid patients in intensive care in France - an increase of 10.2% in the past seven days.

In a statement from March 18, national health body Santé publique France (SPF) said there has been a “rise in the severity of Covid cases among patients aged 15-64, markedly among young adults”.

Hospital AP-HP told newspaper Le Monde that almost 50% of its intensive care admissions were now people aged under 60, as opposed to 30% in this age bracket during the first wave of the pandemic.

This is reflected in hospitals around France. In Nice the average age of ICU patients has fallen from 64 to 62, and in Lille from 63 to 60.

Professor Francis Berenbaum, head of rheumatology at the AP-HP hospital Saint Antoine in east Paris tweeted on March 24 that the average age of patients in his Covid unit had gone down to 52.

Across the AP-HP group, the average time spent in intensive care with intubation has increased from 17 days in 2020, to 21 days in 2021.

Experts have cited a combination of the spread of the UK variant, and the effects of France’s vaccine campaign, as the reason for this change in ICU demographics.

Professor Yves Cohen, head of intensive care at the Avicenne Hospital in Ile-de-France, told newspaper Le Monde that he saw the UK variant as the main factor, as “the change in age in my intensive care unit is happening at the same rate as the progression of the variant”.

Professor Antoine Vieillard-Baron, head of intensive care at the Ambroise-Paré hospital in Ile-de-France, said that the incidence rate (meaning the number of cases per 100,000 people recorded in the past seven days) had “exploded” among people aged 20-60.

He said: “What we didn’t expect was that the virus would bring so many younger people into intensive care.

“We are not excluding the possibility that this could be an effect of a more severe strain of the virus.”

But Professor François-René Pruvot, surgeon at Lille Hospital, said: “What is significant is that we have a lot less intensive care patients aged over 70, which is helping to lower the overall average.

“This could be an effect of vaccination.”

In hospitals in Ile-de-France, figures from SPF show that people aged over 80 accounted for 47.1% of all hospital patients at the beginning of January, to 32.9% by March 23.

Nationally, 52.33% of people aged over 75 have now received at least one dose of the vaccine.

Read more: Covid jab open to all over 70s in France from Saturday 27

While there is no proof that the UK variant is more dangerous for younger age groups, some studies have suggested this is the case.

It found that the risk of hospitalisation from infection by the UK variant rose by 64% in general, and 84% for people aged under 30.

In the UK, research on the variant by Imperial College London and Exeter University was presented to the UK government body the New and Emerging Respiratory Virus Threats Advisory (NERVTAG) on January 21.

Researchers unanimously found that the UK variant was more dangerous, but disagreed on the extent, finding between 29-91% higher likelihood of death among those infected by the variant, depending on the research.

Covid France: Are there more under 60s in intensive care?