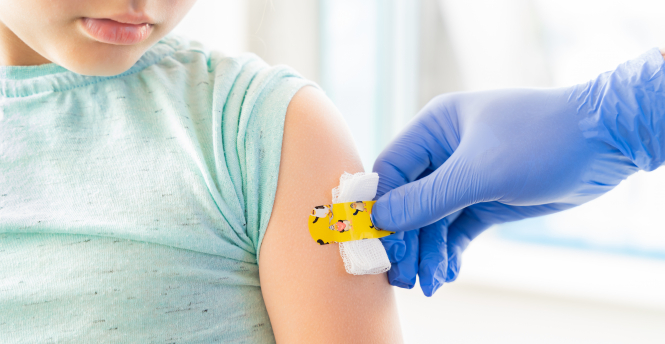 The French health authority is set to issue recommendations on questions such as whether to vaccinate children aged 5 and over in the coming days and weeks Pic: Ira Lichi / Shutterstock

As the fifth wave of Covid spreads at “lightning” speed, France is set to make new decisions about how to fight the virus, including whether to roll out vaccines further and which new treatments to authorise.

Health authority La Haute autorité de Santé (HAS) is expected to make recommendations on a number of questions in the coming days and weeks, with the government then able to choose whether or not to follow its advice.

It comes as government spokesperson Gabriel Attal yesterday (November 21) said that the fifth wave was spreading at “lightning” speed across the country. The latest figures show that there were 19,749 confirmed cases yesterday compared to 10,023 the Sunday before – a rise of 81.4%.

President of the HAS, Professor Dominique Le Guludec, spoke to BFMTV to explain the current situation and possible future recommendations.

She said: “We are seeing a restart of the epidemic, which is not surprising when you see what is happening across the whole of Europe.”

Cases are rising across the continent, with countries such as Belgium and Austria among those to have imposed new lockdowns – although France has so far said it has no plans to impose a new lockdown.

In the meantime, the HAS is set to debate and issue recommendations on the following questions.

A booster dose for everyone?

On Friday, November 19, the HAS already recommended that people aged 40 and over be offered a booster jab.

Currently, boosters are available in France for people who are 65 and over, care home residents, at high risk of a severe infection, healthcare professionals and/or those close to immunosuppressed people. This is set to be opened to over 50s in December.

Some health experts suggest that France may (or should) soon roll out booster jabs to the entire population (as the US has already done).

Booster jabs can be given from six months after the first round of vaccinations.

First vaccinations for the over-50s opened in France in late February this year, and for everyone over 18 from mid-May, meaning that these groups technically became eligible for a booster jab at the six-month mark from mid-August, and everyone else from mid-November (now).

Should France choose to vaccinate everyone with a third dose, data from the ministry of health suggests that this will require the vaccination of 50.5 million people.

As of November 18, France had almost 38.6 million doses of Pfizer and Moderna already in place, with 65 million doses on order set to be delivered by July 2022.

Professor Le Guludec said: “We believe that, for people who have been vaccinated at least six months ago, the booster offers a clear individual benefit for the over-40s. Several studies, especially Israeli ones, show that from this age, [boosters offer a real positive] effect on infections, hospitalisations, and death.”

Since the HAS recommended boosters for the over-40s, Health Minister Olivier Veran has said on Twitter that this “opening up of booster doses will be studied imminently” by the government, and confirmed that boosters will open for the over-50s from December.

President Emmanuel Macron has also previously said that he will call for ‘’booster doses to be opened to people for whom it is effective”.

Vaccination for children over 5?

Worldwide, countries including the US and Israel have already begun vaccinating children, but France has remained cautious on the issue so far, preferring to wait for advice from the European Medicines Agency (EMA) before making a decision.

Professor Dominique Le Guludec, said: “The EMA is set to offer its advice in December, and the HAS will decide on the subject after that. We will determine when we should do it, if we should do it, and who to vaccinate.”

This is not expected to happen in France until “the start of 2022”, she said.

Yet, the Académie nationale de médecine (ANM) has already returned the results of its consultation into the question. On Wednesday (November 17), it said that only some children should benefit from a Covid vaccine, including those at risk of severe forms of the virus, and those living with vulnerable adults.

Similarly to the HAS, the ANM can only issue recommendations and advice to the government, which can then choose whether to follow its guidelines.

Prof Le Guludec said: “It’s a very complicated question because we know that children have a lower risk of developing severe forms of the illness. The interest in doing so will largely be to protect the wider public.”

The HAS is also set to decide whether to recommend the authorisation of anti-Covid tablets.

The pill in question is manufactured by German pharmaceutical giant Merck, and is named Lagevrio.

It is indicated for use within the first five days of symptoms for adults who do not need extra oxygen, and who are at risk of their illness becoming more severe.

Studies suggest that the use of the pill cuts the risk of hospitalisation and death by half.

On Friday (November 19), the EMA approved the use of the tablets in emergency cases. However, the drug has not yet received complete EMA authorisation for non-urgent patients.

France has already ordered 50,000 doses of the drug and is set to have it on standby in pharmacies from the start of December, but the HAS is yet to offer its advice on its use.

Prof Le Guludec said: “We are currently studying this and we should give a response soon, before the end of November.”