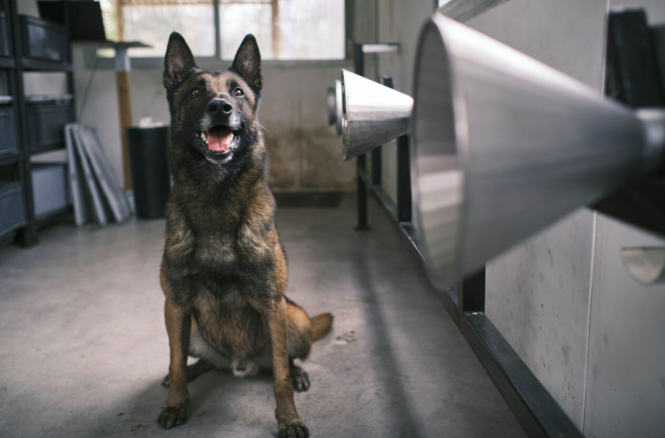 It comes amid hopes that the dogs could be used to help identify positive people in crowded places such as airports and universities.

The trial participants wipe a cloth on their neck or in their armpits to provide a sweat sample, with the samples then placed in containers behind specially designed cones.

The trained dogs then put their noses inside the cones to identify and alert their trainers to any samples that have traces of the Covid-19 virus scent.

The trial is being run by Professor Dominique Grandjean, teacher at a veterinary training school in Maisons-Alfort, Ile-de-France, in partnership with the Paris hospital group APHP, who will run tests alongside to see if Covid tests conducted by sniffer dogs have a higher rate of sensitivity than PCR tests.

It follows on from previous trials by Professor Grandjean, which have yielded promising results.

Virology Professor Constance Delaugerre, from the hôpital Saint-Louis in Paris, told local news source France Bleu, that results from the trial would be available within “two to three weeks”.

She said: “As dogs can detect a cloth with sweat which is positive for Covid-19 in less than 60 seconds, we can envisage using this form of testing in situations where there are a large number of people [such as] airports, for example, but also universities.

“Dogs would do the tests, and only people who test negative could enter.”

Valérie Pécresse, president of the Ile-de-France region told news source FranceInfo that using the sniffer dogs as a testing method “would be really revolutionary”.

Professor Grandjean now plans to run further trials to see if it is possible to train sniffer dogs to recognise the scent of the Covid-19 virus on face masks rather than sweat samples.

He said: “We got the idea thanks to a study on air exhaled from Covid-positive and negative patients who had been intubated at the Foch hospital in Suresnes, [Ile-de-France].

“They noticed that among positive cases they always found the same molecules, specific to the Covid illness. They thought that [these molecules] could be the same as those found in sweat.”