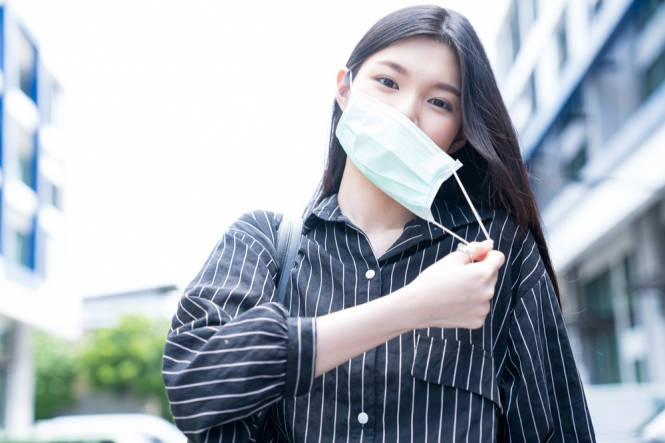 A woman removing her mask. Wearing a mask is no longer mandatory in most outdoor spaces in France Pic: Pixpan_creative / Shutterstock

The Covid-19 situation in France is improving and quickly, France’s Health Minister Olivier Véran has said.

"The epidemic is not over, certainly not, because there are still positive cases, people being hospitalised, there are still variants, notably the Delta one of Indian origin, circulating in our country," he said in an interview with BFMTV this morning (June 17).

"But nationally, the epidemic is receding rapidly and we are back to a situation similar to that we had last August.”

The government announced yesterday that masks would no longer be mandatory outdoors from today except in situations where large crowds gather, and that the night-time curfew will end on June 20, 10 days earlier than planned.

Mr Véran said the decision was taken because the spread of the virus is now low enough to do so.

We take a look at some of the measurements being used to track the Covid-19 epidemic in France, and explain what the figures show.

There are only five departments in metropolitan France with an incidence rate of over 50, which is considered the alert level by the French government.

The average incidence rate in France is 40.

The graph below shows the number of people in intensive care units in France due to Covid-19.

There are currently 1,873 people in ICUs, the lowest the number has been since October 2020. This is 19.5% fewer than the previous week.

The government’s objective is to have no more than 3,000 people in ICUs due to Covid-19, so the number is considerably below this.

The graph below shows the number of daily deaths relating to Covid-19.

Currently, France is averaging 52 deaths per day. This is a drop of 16% on the previous week.

At the peak of the first wave of Covid-19 in spring 2020, France was recording over 500 deaths per day relating to Covid-19. There was another peak of over 400 per day during the second wave in November 2020.

In April this year, France was still averaging over 300 deaths per day, so this number has fallen rapidly.

One element to note is how quickly the death rate can rise. Between October to December last year it rose from under 100 per day to over 400.

With a greater number of people in France now fully vaccinated (see below in article for more information), future increases may not be as drastic.

The table below shows the rate of positive tests in France, represented by the yellow line, ie the percentage of tests that show patients are positive for Covid-19 out of all the tests taken. The rate is currently 1.32%.

This is the lowest the rate has been since July 2020, although at that time far fewer tests were being carried out - this is represented by the grey shading in the graph.

The graph below shows the estimated reproduction number, or R number, in France.

R is the number of people that one infected person will pass on a virus to, on average.

Sars-CoV-2, the virus that causes Covid-19, has a reproduction number of about three if no action is taken to stop it spreading.

The R number is now 0.69 in France, meaning that the epidemic is regressing.

This is the lowest it has been since around December 2020.

France is currently recording between 50 and 150 new cases of the Delta variant every day, which equates to 2-4% of cases, or “still only a few” as Health Minister Olivier Véran said on June 15 .

He called for caution in the face of growing cases in France, saying that France could be on the same trajectory as seen in the UK a few weeks ago.

Professor Jean-Stéphane Dhersin, epidemic modeller at research centre the CNRS, told the HuffPost: “In France, we could have ‘two epidemics’. That of the British variant, and in parallel, a small epidemic of the Delta variant which is progressing rapidly.”

On May 25, the Delta variant was only being detected in 0.5% of tests sequenced in France; less than a month later, this is now 4-8 times more.

However the researcher said that France will not necessarily follow the same path as the UK.

He said: "The UK and France are two different terrains, and as we don't know exactly what Delta will benefit from, it is impossible to predict how it will behave in France.

Mr Véran described Covid-19 vaccines as “an opportunity for humanity”.

“Within just a few months, we have ultra-efficient, safe vaccines that will put an end to this global pandemic.

“They are free and easily accessible for all French people aged 12 and over and the sooner we vaccinate ourselves, the sooner we will be able to say that it is over.”

France has given a first dose of a vaccine to just over 30 million people.

The latest figures show that 16,953,092 people are fully vaccinated. This means they have either had one, two or three vaccine doses, depending on what is required in their situation.

Prime Minister Jean Castex stated yesterday (June 16) that the aim was to have 35 million people in France fully vaccinated by the end of August.

The graph below shows the accumulated number of people who have been vaccinated against Covid-19 in France.

The shaded areas show how many people have been vaccinated to date, and the dotted lines show the projected number of people, based on current rates.

The dark blue represents the number of people who have been or will be fully vaccinated.

The light blue represents the number of people who have or will have received at least a first dose of a vaccine.

2 days ago
4
Tax cuts in France: Where have residents benefitted the most?

4 days ago
5
More than 10,000 Britons in France still awaiting a residency card