Explained: QR code scans and eating inside restaurants in France 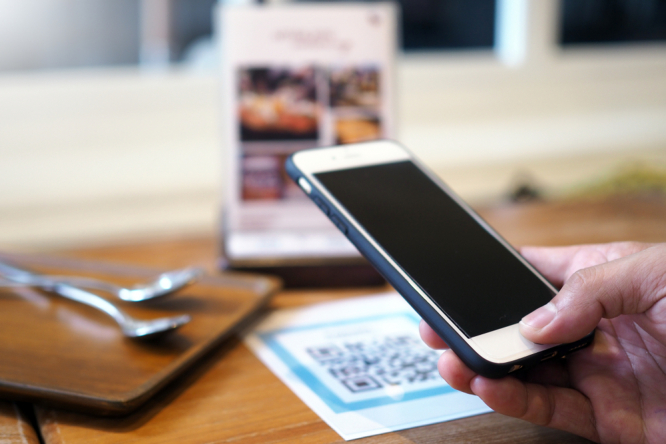 Once you scan a QR code, you will be registered as present in an establishment for the next two hours Pic: shisu_ka / Shutterstock

The next stage of deconfinement in France will begin from June 9 when restaurants, bars, cafés, sports centres and other public places can reopen inside spaces.

But this comes with additional health protocol: in order to enter indoor public spaces, members of the public must provide contact details to enable contact tracing.

This measure was introduced in restaurants last autumn, most often as a physical piece of paper on which all customers would write their name and phone number.

From summer 2021, public spaces will be able to offer a more high-tech solution – scanning a QR code via France’s TousAntiCovid app.

How do I scan a QR code via the app?

To scan a QR code when you enter an indoor public space, open the TousAntiCovid app and tap the “scanner un QR code lieu” box listed under “cahier de rappel”.

Your smartphone will then direct you to take a photo of the QR code provided in the entryway of the establishment.

Scanning the QR code will register you as being present in the establishment for two hours from when you check in.

If someone else who checks in during the same two-hour period later tests positive for Covid-19, the app will send you an ‘orange alert’ asking you to take a Covid test, and isolate while waiting for the results.

The app may also send a ‘red alert’ if three people or more who have tested positive for Covid-19 were in the same establishment as you at the same time.

If you receive a red alert, you need to be tested as soon as possible.

How will the app use my data?

This system is not the same as the health pass - another feature of the app which provides information about your health status via QR codes.

When you scan a QR code to enter a public space, personal details such as your name or whether or not you have had a vaccine will not be recorded.

The app has been created in a way which does not link it to personal information on your phone, just to an anonymised profile.

Professionals using the app to check in at work will only be asked for their job title and how many people work in the space they are using – not their names or post codes.

The TousAntiCovid app will also not access the GPS tracker in your phone, so will not be able to collect or transmit information about your location except for its specified purpose.

A history of locations you have checked in to will be stored on the app for up to 14 days, after which they will be deleted.

Information about places you have visited can only be shared with others, anonymously, if you declare a positive Covid test result on the app.

In this case the total list of places you have visited in the past 14 days is shared with a server, which sends orange or red alerts to other people who have been in public spaces with you in the same time period and may be infected.

No information that could directly identify an individual will be shared by the app.

But technology security expert Baptiste Robert told FranceInfo, others may be able to deduce who had tested positive in very small communities.

He said: “If you live in a small commune and you very occasionally go to the local restaurant, which only has a small number of regular customers, you could quite easily work out who tested positive.”

The code for the app has been made public via GitLab, in order to increase transparency.

Will scanning a QR code be obligatory?

There will be alternative methods of contact tracing for people who do not have smartphones, do not wish to use the QR code system, or do not have access, for example foreign tourists who do not have the TousAntiCovid app.

Paper forms on which people can provide their name and contact details to enable contract tracing will also be available in public spaces.

Establishments have been instructed to provide individual forms as required, although in practice a communal book is often placed at the door, making details given by clients publicly visible.

Records should also be kept in a secure place (such as a locked cupboard) for 14 days, after which they should be destroyed.

In England and Wales 355 establishments have been alerted to possible contaminations via QR code contact tracing in the past six months, figures from the NHS Covid app show.

In France it remains to be seen how the use of QR codes along with paper forms will work.

While QR codes provide an automated solution, paper forms rely on staff in establishments storing details and notifying customers correctly, in addition to the responsibilities of their regular jobs.

Mr Robert said: “The problem with the system is that it requires a collective effort. If everyone doesn’t play the game, it won’t work.”

Curfew and eating out: What Covid rules change in France on June 9?