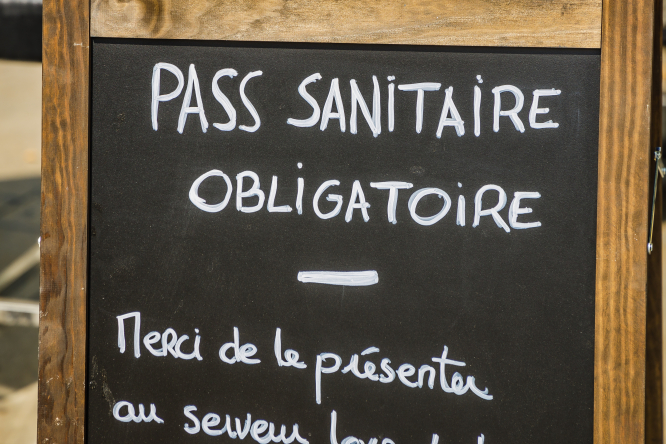 Measures such as increased checks at restaurants and public places could e announced after tomorrow’s government meeting Pic: JeanLucIchard / Shutterstock

The government in France is set to meet tomorrow (November 24) to discuss possible new measures to combat the fifth wave of Covid, which may include offering booster jabs to more people.

It comes two days after government spokesperson Gabriel Attal said that the fifth wave of the virus was spreading “lightning fast” across France, with cases having risen more than 81% in the past week.

Similarly, France is predicted to hit the peak of the fifth wave by the end of December or in January, said Martin Hirsch, director of major Paris hospital group l'Assistance Publique - Hôpitaux de Paris (AP-HP), this week.

Currently, there are 8,083 people in hospital for Covid-related causes in France, compared to 6,300 a month ago.

What measures are on the agenda?

The government meeting of the health cabinet, le Conseil de défense sanitaire – which will include President Macron – will take place at the Elysée palace and is expected to discuss the following:

While more than 75% of the population in France is already vaccinated, the government still wants to target those who have not yet had a jab.

Professor Arnaud Fontanet, epidemiologist and member of le Conseil scientifique, a group of medics who advise the government on Covid, told FranceInfo: “We still have 10% of people who have not received any injection, who are not vaccinated at all. These people are at high risk of being infected with severe forms [of the virus].

“I am especially thinking of the over-80s, of whom 13% are not vaccinated. Their risk of dying is higher than 10% if they are infected.”

Vaccination slows the number of infections, and reduces the severity of the illness, meaning fewer people need to be admitted to hospital, reducing the pressure on hospitals overall.

On November 20, le Conseil scientifique advised the government to “maintain and increase efforts to vaccinate people [with their first doses], because unvaccinated people are 10 times more likely to be hospitalised and need to stay in critical care”.

Offering booster jabs to people aged 50 or over

Le Conseil scientifique has also said it supports the lowering of the eligibility age for booster jabs to 50 and over. President Emmanuel Macron has already announced that the booster dose campaign is to be expanded to include everyone aged 50 and over from the beginning of December.

The conseil council said this would “reduce the number of hospitalisations and admissions into critical care services by 40% to 50%.”

So far, a third of people aged 65 and over have had a booster.

The council has therefore advised the government to step up the booster campaign.

Professor Fontanet said: “The booster dose really increases your immunity. It reduces your risk of infection by a factor of 10, and your risk of hospitalisation by 20, compared to people who have had a second dose but no booster.

It comes as France’s health service quality regulator the Haute Autorité de Santé (HAS) recommended in a report published on November 19 that a Covid vaccine booster dose should be given to people aged 40 and over.

Health Minister Olivier Véran has also said that following the HAS report, the extension of the booster dose to under 50s would be considered in the near future.

The council has recommended that the government "reintroduce the wearing of masks in certain places".

It comes after mandatory mask-wearing was relaxed in most places, including in schools. But the fifth wave has seen a backtrack. In 26 departments, it is now mandatory in some outdoor public places, such as in front of schools, in busy outdoor markets, or at Christmas markets as they open.

Masks are also now required in all primary schools and are set to be required in ski stations, including in ski lifts and in queues.

Yet, masks still are unlikely to be required in places that need a health pass to enter – although individual establishments retain the freedom to make them compulsory if they choose.

Read more: Updated: Where in France do I have to wear a mask when I am outdoors?

The government may also recommend that whenever possible, people work from home again.

Working from home has reduced slightly in recent months - only 10% of employees were working from home at least one day per week in September, compared to 19% at the end of August, government data suggests.

On November 22, Work Minister Elisabeth Borne called on business to “remobilise” efforts to maintain distancing and hygiene methods in workplaces where staff cannot work from home.

And Professor Mahmoud Zureik, epidemiologist, public health expert, and director of Epi-Phare, told FranceInfo that homeworking was a key weapon against the virus.

He said: “We have talked about the health pass, the importance of ventilation, social distancing and wearing masks, but we should probably also encourage working from home again.”

So far there are no plans to impose another lockdown, Mr Attal has said, although he has always admitted that “nothing can be ruled out” altogether, depending on how the pandemic changes.

Read more: No lockdown for the unvaccinated in France, says Macron

Prof Fontanet believes that “the evolution of the epidemic is very volatile” and as such, “it is too early to say how far the measures will have to go to block this wave”.

He said: “If it continues unchecked, and we see the figures and hospitalisations soaring, when we may have a moment where we have to say, we must lock down.”

However, he suggested that individuals could help the situation too, and choose to restrict large gatherings and “expose ourselves less” to the virus voluntarily.

Interior Minister Gérald Darmanin yesterday (November 22) wrote to local prefects to ask them to increase and reinforce checks of the health pass in restaurants.

He wrote: “It is imperative to re-engage all those involved in the application of the health pass in order to limit the effects of the new increase in contamination.

"I ask you to bring together your departmental representatives of the hotel and restaurant industry, to remind them of their obligations in relation to the health crisis.”

Mr Darmanin also asked that police presence be maintained in case of a lack of checks, and reminded prefects that restaurants and bars face closure if they do not comply with the rules.

The minister said that check numbers have “already gone back to the levels seen in September”, after they had been dropping in recent months.

Didier Chenet, president of hospitality union le syndicat patronal des indépendants de l’hôtellerie restauration, said: “To all those who are not checking the health passes of their clients and workers, I am telling you: This is not acceptable.

“As well as yourselves, you are putting the entire profession at risk by exposing us to a blanket closure.”

The council has recommended that tests be increased “as soon as possible after the appearance of symptoms, even in vaccinated people”.

It said that people should still get a test “at the slightest symptom”. Covid tests are currently free for symptomatic, vaccinated people; for non-vaccinated with a prescription, and for contacts of confirmed cases.

The council has also advised extra screening in schools, especially as vaccinations are still only available to children aged 12 and over.