France braces for a winter of strikes 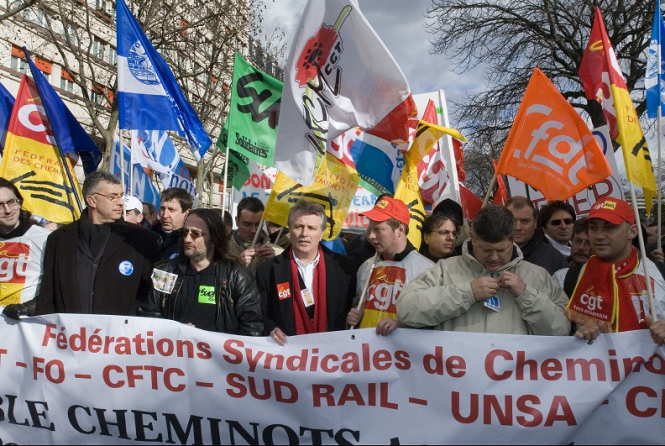 Plans for pension reform brought millions on to the streets in 1995. Pension changes again brought protests in 2007 (as pictured)
By Jane Hanks

A mass strike involving millions of public service workers has been called for December 5 in protest at government pension reform plans.

Some unions are calling for unlimited action, some for repeated strike days, and others for just the one day of protest. December 5 has already been dubbed Black Thursday.

An unwritten rule in France is that if the police count a million people marching during a protest, the government will drop its plans.

In 1995, strikes over pension reform brought two million on to the streets and the government cancelled its plans.

Polls in the first half of November showed 60% of the public behind the strikers, who say they are ready to “take as long as it takes”.

The question is: will President Macron back down over the reforms, which would replace France’s 42 so-called ‘special regimes’ and their enhanced pension rights for some, with a universal system as he pledged in the election?

Teachers, air traffic and airport ground staff, train and metro workers, lawyers, post office and hospital staff will take part in the walk-outs. Workers who rarely take action, such as middle managers, are also joining in.

Some police stations are likely to close as other grievances are aired, and two police unions say they will join the strike if the Interior Minister “does not reply to our wishes” over improved conditions.

They are planning the symbolic closure of stations and refusal to take part in extra checks at airports or at motorway tolls. For the first time, the gilets jaunes say they will join union action – previously they said the unions had let them down.

One leader of the large CGT union, Catherine Perret, says strikes could continue through December, and blocking the reforms would be a wonderful Christmas present.

The four main railway workers’ unions are calling for open-ended action. The RATP public transport in Paris is likely to be hard hit.

Schools will be affected, as the two biggest teaching unions are supporting action.

Barristers say it will be a “Justice Morte” day, with cancellation of some court cases. They and 14 other professions with independent pension regimes, such as physiotherapists, surgeons and airline pilots, have called for their own national strike day on February 3.

The CFE-CGC union, which represents middle management and rarely takes action, has branded the reforms “useless and dangerous” and calls on members to join the strike.

Most want the pension reforms repealed, but others want the proposals re-negotiated. They all think they will lose out, with higher contributions for lower pensions.

The government proposes to replace the special regimes of workers as diverse as the Paris Opera House staff and train drivers with a universal scheme based on points, where €1 paid in gives the same return to all.

The legal retirement age would remain at 62, but a full pension would not be reached until 64. The original plan is to introduce it progressively in 2025 when it would only concern people born after 1963. Another recent suggestion is to restrict the changes to new workers.

Most political commentators and observers think the government will find it difficult to get the reforms accepted.

The biggest outcry came first from régimes spéciaux workers with advantages such as early retirement. They include EDF, GDF, RATP and SNCF. All public service worker pensions are calculated on the last six months of service and not the last 25 years, as in the private sector

However the biggest union, the CFDT, is in favour of the universal points system and says that, while negotiations continue, they will not strike.

Secretary general Laurent Berger has said he wants to see no change in retirement age or length of contributions.

He says the present system needs profound reform, by creating “a universal system where all workers, public and private are united”. However, the railway workers’ section of the CFDT have voted to join their colleagues in open-ended action starting on December 5.

The government is still in a consultation phase over the reforms,  with a law expected to be debated next year.

All recent attempts to overhaul the retirement system have failed. Former Prime Minister Alain Juppé had to admit defeat after three weeks of strikes and a protest with two million on the streets in December 1995.

Mr Macron is determined to go ahead with reforms. He said after a visit to the Somme: “I have an ambitious project for France and I will not go back on it.”

He called the December 5 strike ‘strange’ as no-one knows the exact terms yet and said it was in support of the régimes spéciaux, led mostly by transport workers whose demands would penalise the rest of society.

SNCF says passengers will be able to find out which trains will be running from its website, from 17.00 on December 3.

‘This is solely so people do not feel pension injustice’

The reform is purely political so people do not feel that some groups, such as SNCF workers, have unfair privileges, says Henri Sterdyniak, economist for OFCE, an independent organisation which researches and evaluates public policy.

“It makes no difference to the fact there will be shortfalls as the ageing population grows. Instead the government should gradually introduce a rise in contributions, and that would be sufficient.”

He says 42 pension schemes may seem shocking but most European countries have different systems for different categories of workers.

Changing rules for groups such as SNCF is irrelevant because they only form a small minority of all workers. He does not think the reforms will happen as there is too much opposition.

“It would also be immensely complicated, with lengthy negotiations for each scheme, and what to do with the pension funds they have accumulated?

“Lawyers and others have independent schemes which function well and do not want the government to interfere.

“It is difficult to apply the same conditions to everyone. What about air pilots who cannot work beyond a certain age, or dangerous and physically taxing jobs? They say it may take 20 years or more before the new system is sorted out. It will be too difficult for this unhappy government.”