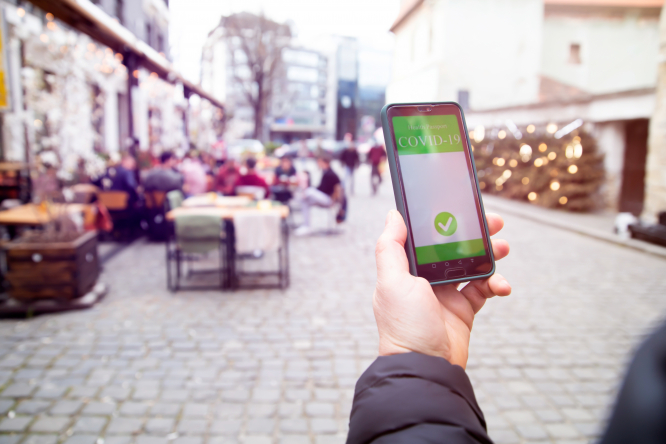 Since France launched its health pass requirement in July, several countries including the UK and Canada have also proceeded with plans to introduce similar measures Pic: Melinda Nagy / Shutterstock

France’s Covid-19 health pass is a success says Health Minister Olivier Véran, and similar initiatives are now being brought in in 'dozens' of other countries around the world.

The health pass obliges people to show proof of full vaccination, a recent negative test – to be paid-for for all in October – or recovery from Covid within the past six months, so as to be able to enter restaurants and bars and a range of other public spaces.

The requirement has met with opposition from some who say it stifles personal freedoms. Anti-health pass protests have been held across France for the past seven weekends.

However, in recent weeks protester numbers have waned to 159,500 from a peak of 237,000 on August 7, and rising vaccination figures suggest that the health pass has pushed more hesitant people to get their first vaccine dose.

Since the pass was announced by President Emmanuel Macron on July 12, 12 million people – or 18% of the population – have been vaccinated, according to Prime Minister Jean Castex.

By March 8 only 3% of the French population was fully vaccinated against Covid-19 according to Le Monde; this figure has now risen to 67%. Take-up among the young has been particularly high considering vaccination was delayed for this group.

Mr Véran told France 5:  “In other countries they’re talking about the health pass and its success in France. Now it’s not just three or five countries that are now doing the same thing as us: Dozens of countries are following suit.”

We take a look at some of the other nations which are planning to impose a health pass.

The UK government announced on August 31 that plans first outlined in July to introduce Covid vaccine passports for nightclubs in England from the end of September are still in place.

It has also suggested that proof of full vaccination may be required for entry into other crowded indoor settings, although specific details have not been confirmed.

This requirement – aimed in part at helping to boost vaccine uptake – has been opposed by MPs and members of the hospitality industry, who believe that it might cause venues to lose income.

The Scottish government also announced on September 1 a plan to introduce vaccine passports for nightclubs and large indoor and outdoor events from the end of the month. This will go before MSPs next week.

In the US the question of vaccine passports is decided by individual states, with some including North Dakota, Alabama and Texas having banned them altogether.

However, certain cities including New York and New Orleans have chosen to introduce health passes for venues such as restaurants and bars, and other states are considering the option.

On September 1, Canada’s most populous province Ontario announced that it would be introducing mandatory vaccine passports for nightclubs, restaurants, bars and indoor sporting facilities from September 22.

Italy has since August 6 had a 'green pass' in place for entry into restaurants and bars as well as gyms, museums, cinemas, theatres and other public venues. People can access it even if they have only had one vaccine dose.

In July, German Chancellor Angela Merkel’s chief of staff Helge Braun suggested that unvaccinated people may be turned away from restaurants and other venues if infection numbers continue to rise in the country.

However, a finalised plan has not yet been confirmed.

Which countries already had a health pass?

If green, an individual can move about freely, whereas a yellow status might require someone to stay at home for seven days.

These codes are being used by many public venues to control entry into the space.

Denmark has had a 'coronapas' system in place since April, making a vaccination certificate proof of recent recovery or negative test result from the last 72 hours compulsory for people wishing to enter spaces including bars, cafés, restaurants, museums and tattooists.

However, the Danish authorities have gradually been lifting this obligation for smaller venues since August 1, and from September 10, it will no longer be needed for entry into nightclubs and big events such as football matches.

On this date, all remaining coronavirus restrictions will be lifted, as the country’s high level of vaccination (71% of the population) has led the government to deem the virus “no longer a critical threat to society.”

Israel has a 'green pass' vaccine certificate in place for every member of its population over the age of three and wishing to enter non-essential venues such as bars and restaurants.

Children under 12 who are not yet eligible for the vaccine can carry out a free antigen test to obtain their pass.

On September 1, the government announced that the green pass would expire six months after a person’s second dose, requiring them to receive a third booster dose in order to continue using it.

Since indoor hospitality reopened in Ireland in July, customers have had to show proof of full vaccination or of recent recovery from Covid in order to be allowed entry.