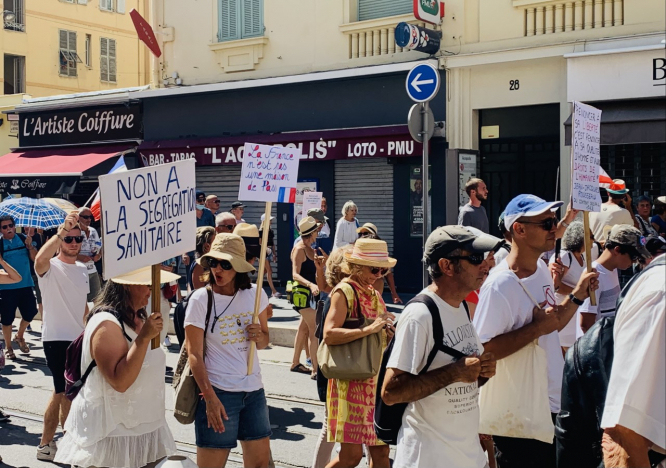 Nice saw its sixth demonstration against the French health pass this weekend. Here, a protester carries a placard reading "No to health segregation" Pic: Emma Morgan / The Connexion

This afternoon (August 21), I have been in Nice, talking with protesters at a demonstration against the French health pass, which requires individuals to show proof of vaccination or a recent negative Covid test before entering a range of public spaces.

Across France, up to 200,000 people out of an adult population of nearly 52 million were expected to take part in 200 different protests this weekend.

This figure is slightly lower than the 214,845 protesters recorded by the Interior Ministry on August 14, and the 237,000 counted on August 7.

When I arrived at the city’s Place Garibaldi, the demonstration was slowly gathering momentum, a speaker eliciting cheers and applause with the words “Is this liberty? No! Is this solidarity? No!”

The atmosphere was friendly and peaceful, but the protesters’ strong sense of purpose was clear to see.

Attendees spanned a variety of groups and motivations, from healthcare workers to gilets jaunes, from families to firefighters, as well as members of the extreme left and right.

Not all of the protesters belong to an anti-vax movement: some have been vaccinated but maintain that others should have the right to choose for themselves.

Despite these differing perspectives, protesters appeared to be united by one thing: hostility towards the government of Emmanuel Macron.

The president’s name appeared repeatedly on protester placards, which read: “Macron and his consorts = tyrants,” “Macron, we don’t want your pass,” “Mr Macron - thanks to you I will lose my job, but I will not have you poison me.”

I asked four of the people present why they had decided to protest today.

Nathalie, who is from the Côte d’Azur and who runs her own business, told me that she has been taking part in protests in Antibes and Nice since they began in July.

“I am fighting against the decline of our society,” she said. “I refuse to lose my rights over my own health. I have already had Covid and I recovered just fine, whereas I know people who have had the vaccine and been very ill."

Manon, a nurse, and Gaetan, an engineer, were at the demonstration with their two young sons, the whole family wearing t-shirts printed with the words “je ne suis pas un code QR” (“I am not a QR code”).

They told me that they are against the health pass because they see it as “discrimination for health reasons.”

“We must not let our liberties slip away,” Manon added.

“I do not want my children to grow up in that type of world, and I certainly do not want them to have the vaccine when they don’t need to.

“I am not against vaccination in general but there is such a low incidence of serious illness  in children that I don’t believe that they should be given a vaccine that is so new.

"The more people that come along and the more noise we make, the more Macron will listen," added Gaetan.

Neither Manon nor Gaetan have been vaccinated against Cocid-19 and, instead advocate the use of medication to treat existing Covid cases, rather than the rollout of a preventative inoculation.

“I’m here for human freedom,” said Laurent, an IT worker and ex-gilet jaune.

“This government has got rid of our democracy; all Western democracies have taken a step backwards.

“I have been protesting for three years, first of all in the gilets jaunes movement, and now here, because between the two issues I see a continuity in Macron’s politics that I don’t agree with.

“I personally have been vaccinated, and if you go into the crowd today you won’t find that many people who are generally anti-vaccines.

“I’m not against the Covid-19 vaccine at all, but I don’t like that there are some pharmaceutical companies who have a monopoly over the whole thing. That’s too much control by one organisation.”

20-year-old Arnaud is about to begin working in hospitality, and argues that the health pass requirement is causing restaurants to lose out on trade.

“If people want to get vaccinated, that’s absolutely fine: I believe in freedom of choice. But it should not be obligatory,” he said.

Arnaud, who has been attending anti-health pass protests in Nice for the past month, said that, rather than imposing the health pass requirement, he believes that there should be more investment made into hospital services and early access to Covid-19 treatments.

As they began to move along Avenue de la République, the protesters were led by a group from firefighter union FA/SPP-PATS, carrying a banner which said “Do not take our freedom from us. Let’s be united.”

Weekly protests against the French health pass are expected to continue into September, by which time they may begin focusing on issues surrounding the vaccination of school children.

The vaccination programme opened in June to adolescents aged between 12 and 17, who will also have to present a health pass from September 30.

A southern sense of rebellion

Demonstrations against the health pass have taken place in hundreds of towns and cities across France, with some southern towns attracting the same or more protesters than Paris.

Last weekend, a gathering of 22,000 protesters in the southern city of Toulon overtook that of the capital, where only 13,900 people turned out to challenge the imposition of the health pass requirement.

In Toulon, the number of people demonstrating has grown week on week from 13,000 on July 31, going against the national downturn.

While I spoke to Arnaud, he suggested that many of the protesters in the south could be Parisians taking part in demonstrations while on their holidays.

However, he also added that people from the south of France are often “quicker to protest” than their compatriots in the north.

The south’s high levels of opposition to the state mandated health pass have been attributed in part to the strength of its regional identities by the Fondation Jean-Jaurès, which argues that the comparatively recent integration of areas such as Occitanie into French territory has fostered an enduring defiance towards central government.

“Historians studying the implementation and levels of acceptance to conscription have, for example, shown that these regions, […] geographically and culturally distanced from Paris, were more resistant than northern regions,” stated a study carried out by the foundation.

“This refusal to submit to the centralised power of the State […] was accompanied by a desire to preserve the local culture.”

Whether this historical sense of rebellion is the cause or not, data shows that people living in the south of France are less likely to get vaccinated against Covid-19.

Across the country, over 40 million – or 73.3% of – adults are now fully vaccinated, but uptake is lower in the southern and southeastern regions of Occitanie and Provence-Alpes-Côte d’Azur, where 70.6% of the eligible population is double-jabbed.

In Brittany, 78.4% of adults are fully vaccinated, while in Normandy the figure stands at 79%.

What is the French pass sanitaire?

The French health pass is not a physical document but instead a term to describe the different ways of showing you do not have Covid-19.

The health pass launched on June 9 and became obligatory for entry into cultural and leisure venues from July 21.

On August 9, the list of affected public spaces was expanded to shopping centres, cafés, bars, restaurants and long distance transports.

Health passes will remain mandatory for entry into these venues until November 15 at least.

Covid France: Gendarmes must be fully vaccinated by September 15