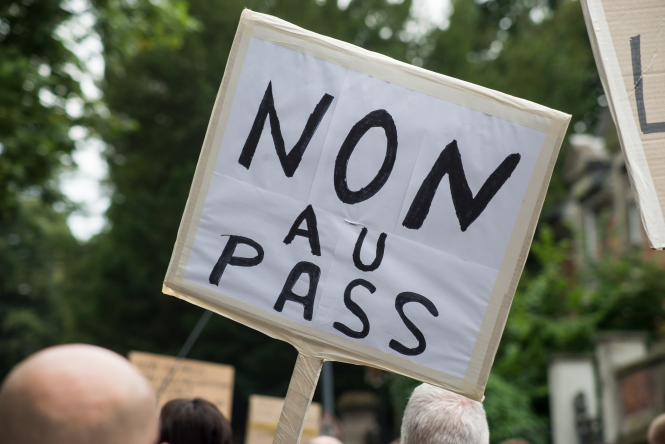 The placard in question appeared to be using the anti-Semitic symbol not in support of its message, but as a way to label Health Minister Olivier Véran as a 'Nazi' Pic: NeydtStock / Shutterstock

An inquiry has been opened after a placard bearing a swastika was seen at an anti-health pass march in Vosges, eastern France.

The prefecture notified the local prosecutor “on the basis of article 40 of the penal code”, which requires any authorities who learn of a suspected crime to alert the justice system.

The prosecutor opened the inquiry yesterday (August 16) after a photo of the protest march in Epinal on August 14, including the offensive symbol, was published in local newspaper Vosges Matin.

The Epinal prosecutor told AFP: “An inquiry has been ordered on the initiative of the prosecutor, given the photo that was published in Vosges Matin.”

The prefecture said: “The placard in question was indeed identified during the protest of last Saturday.”

The placard was held by a man, who has not yet been publicly identified.

He appeared to be using the anti-Semitic symbol not in support of its message, but as a way to label Health Minister Olivier Véran as a “big Nazi”. The symbol was clearly drawn alongside letters spelling out “LREM”, to signify the ruling party, La République en Marche.

The placard also called the leaders “collabos”, as in “collaborators”; and contained the line: “No to the health pass”.

The man was not challenged or arrested for his use of the swastika symbol during the march.

It comes in the context of many protesters calling the government’s health pass rules a ‘health dictatorship’, and calls for ‘freedom’ for people to choose whether to be vaccinated or not. Vaccination is not mandatory in France, except for people working in 70 healthcare professions.

The use of a health pass to enter many public spaces, including bars and restaurants, is mandatory in most cases. The health pass shows whether the holder has been vaccinated, that they have had a negative Covid test from within the past 72 hours, or that they have previously had Covid and are still immune.

The placard is not the only anti-Semitic message seen during the anti-health pass protests to be formally investigated.

The prefecture in Epinal and now the local police are already investigating the use of another swastika symbol, this time made up of hand-drawn syringes, which was held up during an anti-pass protest the week before.

Yet another placard condemned President Emmanuel Macron and Health Minister Olivier Véran as traitors, along with several figures of Jewish origin, including the Rothschild family and investor George Soros – about whom far-right conspiracy theories are rife.

The placard also asked the question “Mais Qui? (But who?)”, a phrase associated with anti-Semitism.

The woman carrying the placard was taken into custody for questioning on August 9 in connection with the incident.

It has been found that she is a replacement teacher and former member of France's far-right party, the Front National [now called the Rassemblement National].

French education minister, Jean-Michel Blanquer, has said that she has been suspended from her job ahead of further disciplinary action.

Why are there more anti-Covid pass protesters in Toulon than in Paris?
French health pass protests: Who is the ‘qui’ mentioned on placards?