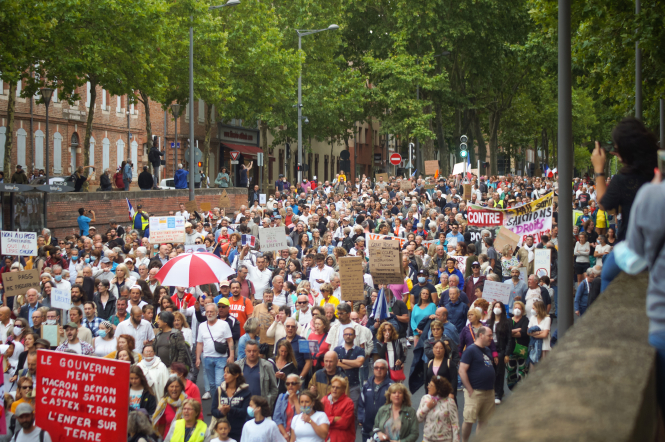 In the past few weeks, thousands have gathered to protests against the health pass in cities around France Pic: S. Pech / Shutterstock

[update 09/08/21] The woman carrying the placard in this article was taken into custody for questioning on August 9. It has been revealed that she is a replacement teacher and former member of France's far-right party, the Front national [now Rassemblement national]. French education minister, Jean-Michel Blanquer, has said that she will be suspended from her job ahead of further disciplinary action.

Protests against rules to extend the French health pass were held over the weekend, with 237,000 people taking to the streets on Saturday, August 7.

In Metz, Grand Est, where 3,800 people protested, police investigations have opened into a woman carrying placard with an anti-Semitic message that has caused widespread condemnation and shock among politicians and the public.

Listed on the sign were people described as “traitors” including President Emmanuel Macron, Health Minister Olivier Véran and his predecessor Agnès Buzyn and President of the Conseil constitutionnel, Laurent Fabius.

Also included were the Rothschild family, and businessman and owner of French media outlet BFMTV Patrick Drahi, both of whom are known to be Jewish – but have no known links to the health pass regulations.

In the centre of the sign was a message reading Mais qui? (But who?) with devil’s horns framing one of the letters.

The phase refers to an interview on CNews on June 18, during which former French general Dominique Delawarde was accused of making anti-Semitic remarks.

During the interview Mr Delawarde spoke about a blog post he wrote criticising “media silence” around “potential fraud” during the 2020 US presidential elections.

When asked who he believed was behind the silence, Mr Delawarde replied “You know very well who controls the mute media in France and the world. Who controls the Washington Post, the New York Times, BFMTV in France and all the associated newspapers? Who are these people?”

“It’s a community you know very well” Mr Delawarde replied, implying the Jewish community, before the interview was taken off air.

Following the remarks, an inquiry has been opened into Mr Delawarde for public defamation and provoking hate and violence.

The television host’s question – qui? – has since become a slogan on placards at protests against the health pass, used to propagate antisemitism.

The placard in Metz was shared widely online, and denounced by senior politicians.

Interior Minister Gérald Darmanin tweeted an image of the placard along with a message saying that it was a “contemptible” message that would not go unpunished by the law.

Junior minister for the armed forces, Genéviève Darrieussecq, tweeted: “So some people did not learn anything or remember the events of the 20th century? This is worrying and revolting.”

The Israeli Embassy in France said: “It is horrendous to see such a contemptable expression of anti-Semitic hate in the streets in Metz, and the indifference of surrounding people. This apparent lack of consequences is ridiculous.”

“Antisemitism is a crime, and anyone who is making racist or anti-Semitic statements is not in line with Marine Le Pen,” he said.

The Ligue internationale contre le racisme et l’antisémitisme announced that it was investigating taking legal action against the protestor who carried the sign.

At previous protests against the health pass, protestors have been criticised for wearing yellow stars to imply that under the health pass rules, non-vaccinated people face similar persecution to French Jews deported to concentration camps during World War Two.