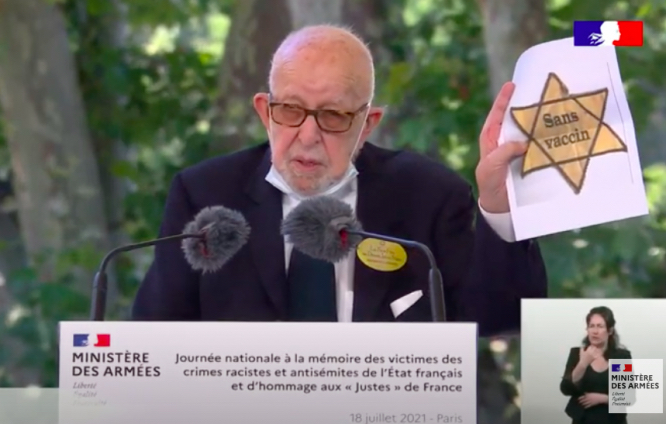 A survivor of the largest deportation of Jews in France during World War Two has spoken out against people who wore yellow stars at a protest against the new rules for using the Covid-19 health pass in France.

Speaking at a ceremony to commemorate the national Memorial Day for victims of racist and antisemitic crimes, Joseph Szwarc held up an image of the yellow non-vacciné star some protestors wore.

He said: “I would like to state my indignation over what we have seen this week. I wore the star. I know what it means. I still feel it in my flesh.”

It was the largest deportation of Jews in France during World War Two, during which 13,000 Jewish men, women and children were arrested and held in the Velodrome d’Hiver sports arena with no food, water or sanitary facilities for five days, before being transferred to concentration camps.

Most were sent to Auschwitz.

Mr Szwarc said of seeing yellow stars being worn at recent protests in France: “You cannot imagine how emotional it made me, I started crying.

“I want to express my outrage over what we have seen this week.”

Protestors were opposing new rules to extend the use of the French health pass this summer.

The new rules will make it more difficult for people who have not been vaccinated against Covid-19 to access public spaces including restaurants, cinemas, gyms and long-distance transport.

To access these spaces people will need to show proof of full vaccination, a negative PCR test result taken within the previous 48 hours or proof of having had Covid-19 already and so being considered immune.

PCR tests will cost €49 without prescription from autumn, while vaccination will remain free.

Arno Klarsfeld, lawyer and member of the Sons and Daughters of Jews deported from France, also criticised protestors for comparing the new rules in France to the Nazi regime.

He said: “The yellow star was a passport that sent you to death, but the vaccine allows us to save lives.”

He described the protestors as “anti-Semites who want to minimise the suffering of the Jews”. He added: “For those who don’t know, I would like to state that two thirds of Jews in Europe were annihilated [during World War Two].”

Mr Klarsfeld also asked why the protestors had not been excluded from the protest by organisers.

“What worries me is that no one reacted. Those who organised the protests did not react and law enforcement did not throw them out.”

114,000 protest against health pass and vaccination in France