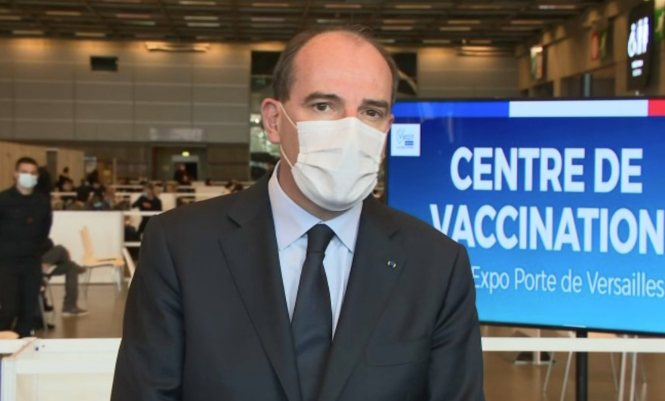 During a visit to a Paris vaccinodrome, Prime Minister Jean Castex said: "We must vaccinate, vaccinate, and vaccinate some more." Pic: BFMTV / @BFMTV / Twitter

France has hit its target of administering at least one vaccine dose to 20 million people by mid-May, President Emmanuel Macron has confirmed.

The president confirmed the target had been hit in a simple Tweet yesterday (Saturday May 15).

Earlier, Prime Minister Jean Castex had said he was “reasonably optimistic” that the objective would be reached, despite acknowledging last week that there had been fears that the “delays of the AstraZeneca vaccine” could have derailed the plans.

On Tuesday May 11, he said that the country would “do everything” to reach the target, and on Saturday 15 during a visit to a Paris vaccinodrome, he said: "We must vaccinate, vaccinate, and vaccinate some more."

Health Minister Olivier Véran had predicted that the target would be hit.

On Friday April 14, he wrote: “Another 600,000 vaccinations given today. The exceptional work is continuing across the country.  Tomorrow [Saturday May 15], 20 million in France will have received at least one injection.”

At the time of writing, official figures (with the most recent update from health body Santė publique France from Friday May 14) show that 19,754,251 have so far received the first dose, but with more than half a million doses being given each day, that will equate to more than 20 million by Saturday May 15.

The most recent figure (from May 14) shows that 9,346,658 people in France have received both doses of the vaccine. All vaccines being used in France require two injections to be fully effective, except the Johson & Johnson Janssen jab (and some vulnerable people are being given three injections of the other kinds).

Delays and issues with the vaccination campaign had threatened to derail the government’s targets.

Delivery delays for the AstraZeneca vaccine did not help. In mid-March, the company admitted that it would fall short of its delivery aims for the European Union.

At the time, Junior Work Minister Agnès Pannier-Runacher said: “We will only have 25% of doses delivered [by the end of the first quarter].”

Similarly, fears over the effectiveness of the AstraZeneca vaccines, and the emergence of a very rare link between the jab and blood clotting issues, also threatened to slow the campaign.

At the beginning of May, Mr Castex called on the public to continue to get the vaccine, echoing assurances from the European Medicines Agency that the benefits of the jab continue to outweigh the risks.

After months of opening vaccinations to priority groups only, on Wednesday May 12, France opened the possibility of next-day vaccination appointments to anyone aged 18 or over under the Covidliste service which has the aim of saving doses that otherwise risk being lost.

The government’s next target is to have administered 30 million first injections by mid-June, which is the equivalent of two-thirds of the voluntary, eligible adult population.

11 hours ago
4
French vaccine pass ruled to be constitutional, it will begin Monday