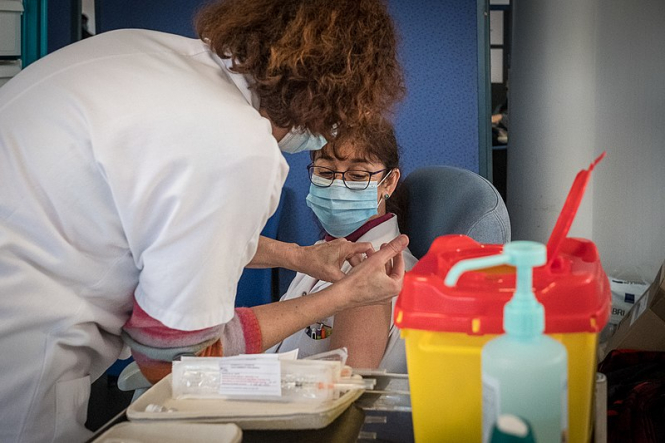 The third goal is to have given 30 million first doses by mid-June, at which point vaccination appointments will become available to all people aged over 18.

Read more: France’s Covid vaccination calendar - Who is eligible and when?

The government easily hit its 10 million target for mid-April, having given 10,270,095 first doses by April 8.

The deadline for the second 20 million target is looking a little tighter. Figures from May 3 show 16,158,403 first doses have been given so far.

The site Covidtracker forecasts that - going at the current rate of around 38,000 doses per day including first and second doses - 18,785,596 first doses will have been given by mid-May,

But the pace of vaccination is still increasing. While 2.7 million doses were given in total last week, 3 million are expected to be given this week.

Vaccination currently open to people over 55

Vaccination appointments are currently open to people over 55, and people aged over 18 with an illness that makes them vulnerable to severe forms of the virus.

There are still 5 million people aged over 55 in France who have not been vaccinated, possibly by choice. Last week, reports surfaced of thousands of vaccine appointments not being taken up each day.

But Health Minister Olivier Véran told BFMTV last week that there was “vigorous” demand for vaccination among the public, and that the number of appointments being made was increasing.

He added: “The rule is that we do not throw away any doses. The vaccination centres have call lists for people who have future appointments or who are on a waiting list, or the most vulnerable, and I invite centre managers to use this list to fill every vaccine appointment in every centre.”

Read more: Eligible for a Covid jab in France but no slots open? Try these tips

Over 70 million doses to arrive in France by July

Previous concerns over vaccine deliveries also appear to have been resolved.

Figures from la Direction Générale de la Santé (DGS) show that 77.2 million doses of all vaccines are to be delivered to France between the end of December 2020 and the end of June 2021.

In June alone, 32.2 million doses are expected, of which 20 million will be the Pfizer vaccine.

The Johnson & Johnson vaccine is now also playing a significant role, with more than 65,000 doses of the vaccine being given since it started being used in France at the end of April.

The total number of first and second vaccines given in France at the time of writing is over 23 million.

As vaccine numbers are rising, the number of Covid patients in intensive care in France is falling.

Patient numbers have now fallen under the threshold of 5,600.

Figures from Tuesday, May 4, show that intensive care patient numbers had fallen to 5,504 from 5,630 the previous day.

On Tuesday, 243 patients with Covid died in hospital compared with 311 the previous day.

The total number of patients with Covid in hospitals is also falling. One week ago, there were more than 30,000 Covid patients in hospitals nationally. By Tuesday May 4, that had fallen to 28,427.

Figures from May 4 also showed that all departments in France had incidence rates (the number of cases per 100,000 inhabitants in the past seven days) under 400.

While daily cases are also going down, this could be explained by especially low numbers of tests done on the May 1 national holiday.

Now, questions are being asked about how to continue vaccination efforts over summer, as many people may wish to make travel plans, which could disrupt access to the second shot of the vaccine needed for the Pfizer, Moderna and AstraZeneca vaccines.

One option being considered is sending extra doses of the vaccine to popular French tourist destinations near the sea and in the mountains, so that people could potentially receive a second dose while on holiday.

But the health ministry has said this strategy would only be effective if a sufficient number of vaccination centres could be opened and staffed in these areas.

In the meantime, extra efforts are planned to make more vaccine appointments available, including extra slots in the evenings and at the weekend to make vaccination as accessible as possible.

France under pressure to speed up Covid vaccine programme