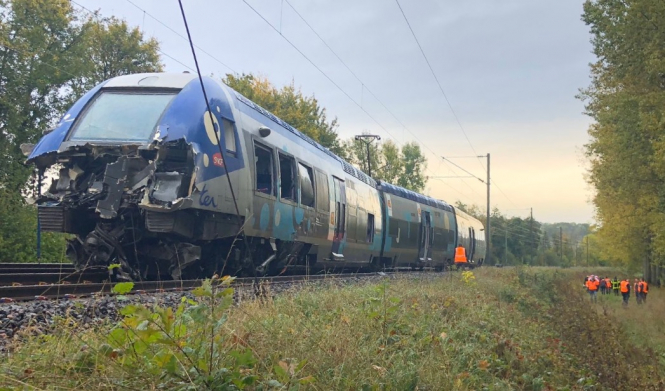 Services in several regions - including Ile-de-France, Grand Est, Hauts-de-France, Occitanie, Pays de la Loire and Nouvelle-Aquitaine - are being affected by disruption and delays after staff did not show up for work in protest.

The movement, which is not the same as a strike, has been launched by workers’ union the CGT, who called on its members to exercise what they claim is a “right to withdraw” from service in the event of worker safety concerns.

Union bosses are calling on SNCF to ensure a second staff member is on board each train service - in addition to the driver - to help ensure passenger safety. Currently, some services run with only the driver on board, which the union says is dangerous and insufficient.

It comes after an accident two days ago (Tuesday October 16), in which a TER train hit a heavy goods vehicle (HGV) at a level crossing in Saint-Pierre-sur-Vence (Ardennes, Grand Est), injuring 11 people, including the driver.

The CGT claims that this accident proves the need for an extra staff member to be on board, as the driver in this case was the only staff member present to assist passengers when the incident occurred, and was reportedly forced to leave passengers alone on the train at some points to deal with the aftermath of the crash.

Union reps and SNCF management are expected to meet later this morning to find a solution to the movement, and address staff safety concerns.

But junior transport minister Jean-Baptiste Djebbari told news network BMFTV that the union was acting unfairly and illegally, and said that the issue of train drivers being “alone” on trains was not new or unusual.

He said: “To say that [the workers] are operating a ‘right to withdrawal’, when there isn’t one, is penalising users. One does not exploit a security issue to make a political statement.

“The CGT is fighting against train drivers being alone [on their trains] but this has been the case for the past ten years.”

Due to the “unannounced” nature of the movement, SNCF has said it will not be able to confirm exactly which services or lines will be affected. Passengers are urged to check their specific journey before attempting to travel, and, if possible, to postpone their journeys completely.

Social media users posted scenes of extremely busy stations and considerable disruption this morning as passengers attempted to use the reduced services.