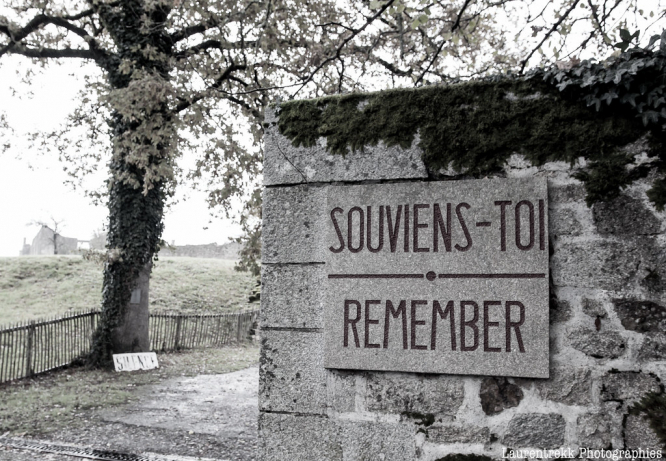 The wall of the memorial centre in Oradour-sur-Glane bears the inscription village martyr (village of martyrs), but vandals scored out the word ‘martyr’ and instead wrote ‘menteur’ - liar in English - along with other messaging that France’s interior minister deemed to be “Holocaust denying”.

Other graffiti - which has all since been covered over - claimed, "Reynouard is right"The former professor of mathematics was struck off after producing a conspiracy-theorist film in 1997, in which he contested evidence from suvivors given at a trial in Bordeaux in 1953, and made startling claims about the events of the day.

“The Holocaust denial inscriptions in Oradour-sur-Glane spit on the memory of our martyrs. The services of the Ministry of the Interior are at the disposal of the mayor of the commune to have the author of this abject smear arrested,” Gérald Darmanin wrote.

On June 10, 1944, Oradour-sur-Glane in Haute-Vienne in Nazi-occupied France was destroyed and 642 of its inhabitants massacred by German SS troops.

In response, then-President General Charles de Gaulle ordered that the village remain in ruins, as a permanent memorial to the atrocities, and the suffering of the people.

The president of the memorial centre, Fabrice Escure, apologised for the offence caused by the vandalism and indicated that he wanted to file a complaint.

The memorial at Oradour sur Glane was defaced on Friday by activists/deniers. It has already been covered and I'm sure will be repaired soon. We must NEVER FORGET the atrocities of the past! https://t.co/KQhouWcOx3

“To defile this place of recollection is also to sully the memory of our martyrs,” he wrote.

“Everything possible is being done to ensure that the perpetrators of these infamous acts are brought to justice.”

Robert Hébras, the last survivor of the massacre of June 10, 1944, in which 642 men, women and children were slaughtered, said: "This is something that shocks me a lot. These people who do this and call us liars! I have lived the drama. I know very well who was in front of me, the soldiers of the Das Reich division on June 10, 1944!"