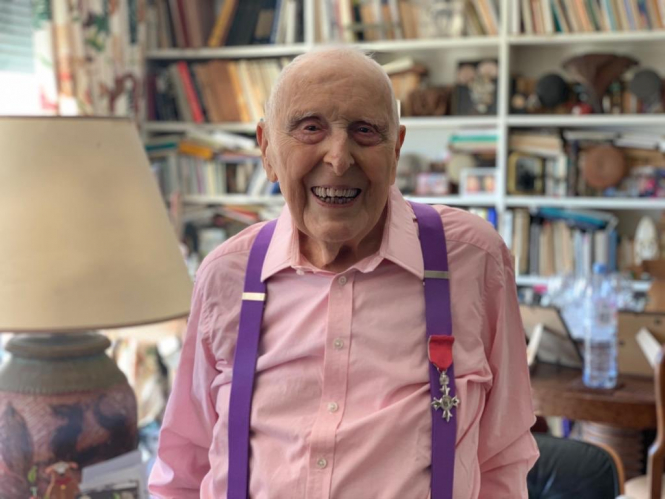 Daniel Cordier, French war hero, was awarded with an MBE in June this year
By Connexion journalist

Daniel Cordier died on Friday aged 100 after a remarkable life that saw him play a key role in France’s resistance during World War Two, as well as campaigning for gay rights and having a profitable career selling art.

President Macron paid homage to the veteran and promised him a national tribute.

“When France was in peril, he and his companions took all the risks so that France remained France. We owe them our freedom and our honour. We will pay him a national tribute.”

Moulin is considered by some historians as one of the most important figures in the French Resistance because of his actions in unifying and organising the various, disparate resistance groups in the country.

Mr Cordier was also awarded an MBE earlier this year, which he was presented with at his home in Cannes.

He cried when France signed an armistice with Germany

Mr Cordier was born in Bordeaux on August 10, 1920. He was on the verge of being incorporated into the military in 1940 when Marshal Philippe Pétain, France’s head of state at the time, signed a peace treaty with Germany and gave up the fight against Nazi Germany.

"I naively thought, my parents thought as I did, that Pétain was going to launch France's victorious counter-offensive and instead he announced the end of the fighting, that is to say the end of hope. I burst into tears, I went up to my room and cried a lot," Mr Cordier said in an interview with France Culture in 2010.

After this, Mr Cordier decided to join the Free French Forces and headed for London, where he met General Charles de Gaulle.

He knew Jean Moulin only as Rex or Max

In 1942, Mr Cordier was parachuted into France to help unite resistance groups in the country. He founded and managed Jean Moulin’s office and for 11 months he was one of his closest collaborators.

He managed his mail and radio links with London. He also helped him to set up various resistance groups and services, and assisted his patient efforts to unify the French Resistance within the country.

He remained his right-hand man until Moulin’s arrest in June, 1943. In all the time working with him, Mr Cordier knew Moulin only as Rex or Max, his code names. He only learned his real name in October 1944.

He spoke out in favour of gay marriage

Mr Cordier was gay but had to hide his sexuality for a long time.

"The hatred towards homosexuality was terrible," he told magazine Têtu.

In an interview with newspaper Le Monde in 2018, he defended same-sex marriage.

"It goes with the idea of freedom. I fought for freedom. And freedom is also the freedom to do what you want with your body and with your sexuality. This is very important," he said.

He also wrote a book about a young gay couple, called Les Feux de Saint-Elme, which was published in 2014.

He was a successful author

Les Feux de Saint-Elme was not his only literary exploit. He also wrote extensively on the life of Jean Moulin.

In 2009, he published his memoirs under the title Alias Caracalla. It won numerous awards, including the Prix littéraire de la Résistance, and was nominated for the Prix Goncourt.

Bernard Pivot, who was the president of the jury for the Prix Goncourt that year, wrote on Twitter that he regrets that Mr Cordier was not given the award.

He got rich selling paintings

Mr Cordier was introduced to painting by Jean Moulin, and he began a career as an artist and collector after World War Two.

“I made my fortune in paintings,” he told France Culture.

“It is true that I did not want to lose the money I made quite fairly. It allowed me to work for 30 years writing volumes about Jean Moulin.”

Armistice Day: Why we remember, 102 years on

Britons in France can order their poppies by email