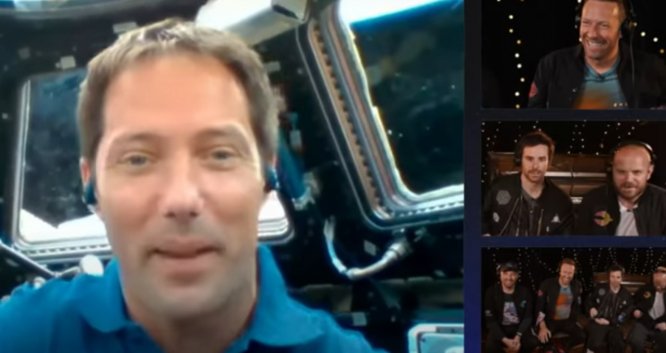 Thomas Pesquet is the first Frenchman to hold the post of ISS commander. He spoke to the band Coldplay via video link from space Pic: Coldplay / YouTube / Screenshot

British band Coldplay has released its new single from space, thanks to French astronaut Thomas Pesquet, who is currently on the International Space Station (ISS).

Mr Pesquet, who is the first Frenchman to hold the post of ISS commander, literally ‘launched’ the song, Higher Power, playing it publicly for the first time ever while weightless in the ISS.

The members of the band watched and listened in from Earth via video link, as Mr Pesquet hit ‘play’.

Lead singer Chris Martin said, laughing: “We aren’t able to play for anyone on Earth [because of Covid], so we thought we’d just play for you. It’s our one-man concert.

“This is the premiere in the whole galaxy.”

Mr Pesquet spoke English with the band and gave them a quick video tour of the station, including showing them the view from the back window, with the Earth clearly visible behind.

Mr Martin said: “This song is about how to find ‘the astronaut’ in each one of us...the person who can do amazing things.”

The single – the full-length runtime of which is eight minutes – was released ‘officially’ on Earth at midnight last night (May 6).

Mr Pesquet answered several questions from the band, and revealed that he enjoys listening to music while weightless, as a way to relax in the ISS.

He said: “I like it in the evening, when everyone goes to bed, when the station is dark, I turn the lights off, I put my headphones in, I put on some music, and I just float...and that’s really cool.

“You’re free from the constraints of your body in a way, and you focus on the music...and that takes me away from the daily grind.”

Mr Pesquet also put on some sunglasses during the live link, and said: “Not that I’m trying to look cool, but you’re supposed to wear these when you’re in the cupola [section of the ISS].”

In response, Mr Martin said: “Now you look more like a rockstar than we ever did.”

Mr Pesquet, who is originally from Rouen in Normandy, took off with Mission Alpha to the ISS on April 23, and will be on the craft for six months in total.