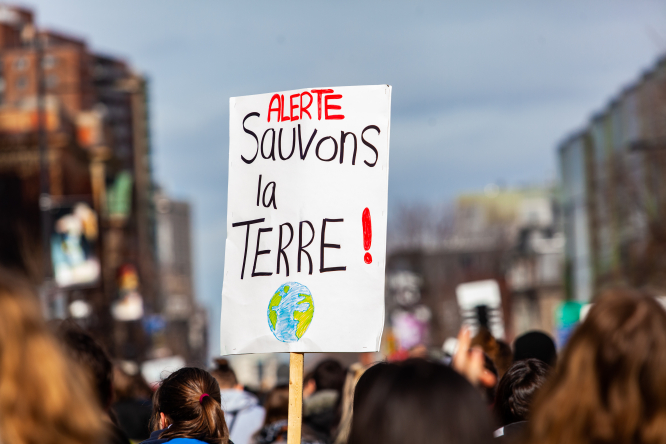 "Alert, let's save the earth" a French sign held at an ecological protest Pic: Valmedia / Shutterstock

A French court has ordered the government to honour its commitment to reducing greenhouse gases and meet climate change targets in a ruling handed down yesterday (October 14).

The administrative court in Paris has given the state until December 31, 2022 to “repair the ecological damage” caused by France’s failure to meet its climate-related targets, and to prevent further damage.

The case was brought by a movement called The Case of the Century (l'Affaire du siècle), which is supported by four environmental organisations in France.

The movement seeks to use the judiciary system to hold the government accountable for tackling climate change issues in the name of the general interest of the population.

In February this year, the same court ruled in favour of the four organisations behind the complaint - Notre Affaire à Tous, the Fondation Nicolas Hulot pour la nature et l'homme (FNH), Greenpeace France and Oxfam France -, declaring the state "responsible" for failing to meet its own commitments, notably those under the 2015 Paris Agreement.

The organisations then asked the court to order the state to take measures to repair this damage, which it has now done.

Jean-François Julliard, director of Greenpeace France, Tweeted: “This is a defining day for climate justice.” He added that the government’s inaction over the climate is now being punished.

The court stated that the greenhouse gas emissions cap set by the first carbon budget for the period 2015-2018 was exceeded by 62 million tonnes of CO2 equivalent.

It noted that there was a substantial reduction in greenhouse gas emissions in 2020, although this was mainly related to the effects of the Covid pandemic and not to specific action by the state.

Taking that into account, the judges found France to have gone over its emissions targets by 15 million tonnes of CO2 equivalent.

The court did not specify how the government should repair the damage caused, deeming that this is not for it to decide. The French government has not yet commented on the court’s decision.

France is a signatory of the 2015 Paris Agreement, a legally binding international treaty that sets the target to limit global warming to 2C, and preferably 1.5C, above pre-industrial levels.

Almost every country on the planet has formally endorsed the Paris Agreement, with Iran, Iraq and Turkey being notable exceptions.

The town of Grande-Synthe (Nord) has also appealed to courts to hold the government accountable for climate-related pledges.

In July this year, the Conseil d’État, the highest administrative court in France, ruled in favour of the town’s appeal, which was supported by the organisations involved in the Affair du siécle and Paris and Grenoble.

The court ordered the French government to “take all useful measures to curb the curve of greenhouse gas emissions" in order to meet its 2030 reduction targets. It gave the government the deadline of March 31, 2022, to get the country back on course to reach its climate objectives.

The French government has decreed by law its own target of reducing its emissions by 40% by 2030 compared to 1990 levels.