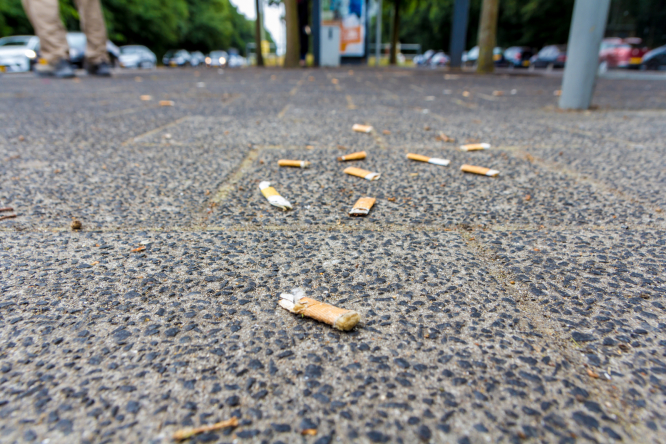 The Ecology Ministry estimates that up to 25,000 tonnes of butts are discarded a year in France Pic: Andrew Balcombe / Shutterstock

Cigarette butt litter is to be cleared up by an organisation funded by tobacco firms on the principle that the polluter pays.

The target is to reduce the number of dropped butts by 40% within six years.

The government said earlier this year that tobacco firms would have to pay for much of the pollution caused by discarded cigarette ends.

Alcome has been formed to put this into practice. It is technically an éco-organisme for cigarette butts.

The term refers to a company formed by makers and distributors in a sector to manage their responsibilities with regard to how their products end up affecting the environment.

Alcome’s job will include collecting money from the firms and distributing it for clean-up operations, as well as organising initiatives such as installation of new colourful street ashtrays.

Each year, billions of butts find their way into the natural environment, allowing harmful chemicals such as lead and arsenic to enter the soil in the decade they take to decompose.

The Ecology Ministry estimates that up to 25,000 tonnes are discarded a year.

A spokesperson for Alcome said the tobacco firm contributions will be based on studies determining the number of cigarette ends that are being improperly disposed of each year.

She said: “Once the butts have been collected, they will be incinerated, as we believe that to be the best solution.

“It turns out to be the most ecological.”

Alcome believes the cost of clean-up will not affect cigarette prices, she added.

Although collecting cigarette ends will help to reduce pollution, Alcome is aware that this solution will last only if smoker habits change.

“At the moment, smokers aren’t necessarily conscious of the repercussions of throwing away cigarette ends,” she said.

“So this programme is not just about cleaning up, but also about raising awareness.

“You can’t just tidy up and believe that the job is done.”

Alcome will be running campaigns, especially in busy areas such as beaches, which will reflect the scale of the issue and encourage people to dispose of cigarettes responsibly.

Santé Publique France says that, as of 2020, a quarter of French people smoked daily, up slightly on the previous year.