French courtroom's calming Labrador is to star in a book 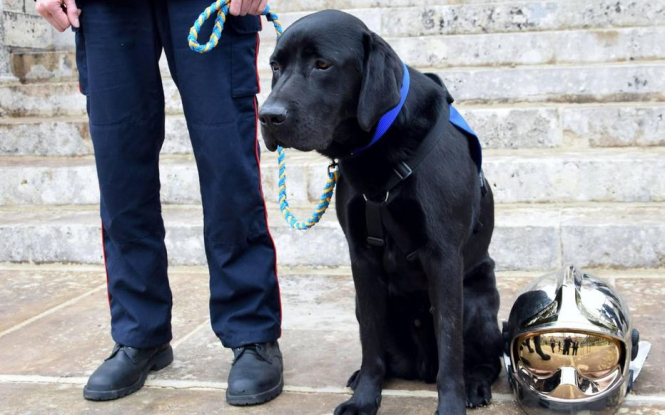 A black Labrador which has been working as a support dog in courtrooms in Occitanie is to star in a book, written by the prosecutor who first brought the dog to court.

Lol has been working as a legal support dog in Cahors since 2019, and is considered a big success in the role – the only one of its kind in Europe.

The Labrador often accompanies children and teenagers who need to participate in legal proceedings but might find the formal setting intimidating.

Jean-Thibault Daniel, of the Handi’chiens association which owns Lol, said: “Having a friendly, empathetic dog by their side makes all the difference.

“He sits quietly at the side of the victim or witnesses, but I have seen him react and nuzzle or rub gently against people when they are becoming tense and upset and it does seem to calm them down, so they can carry on with their testimony or listen to the trial.”

A book telling the “Lol story” will promote the work of legal support dogs and raise money for victim support association France Victimes.

Public prosecutor Frédéric Almendros first had the idea that Lol could support people during stressful legal proceedings, even though therapy dogs were not used in French courts at the time.

He told La Dépêche: “In the beginning, nothing was certain. This kind of experiment was totally new and I couldn’t sleep at night. I was afraid of a million things; that it wouldn’t work, that Lol would bite a child…”

Lol has been specially trained to help people in distress, and has since helped 60 people aged from three years old to 90 stay calm during legal proceedings including police questioning and court trials.

In 2019, Lol's work was recognised by France Victimes, which awarded the dog the Coup de cœur prize.

And Lol’s most high-profile case to date was working as a support dog during the international congress on victims’ rights at the European Parliament in 2019.

Following this French courts in Strasbourg, Orléans, Nîmes and more have planned to introduce their own legal support dogs, and the police are collaborating with universities on an official training program for other dogs to perform the role.

Mr Almendros said: “Lawyers, experts, firemen, and everyone answerable to the law recognises the support the Lol brings.”

In Cahors, there are hopes that Lol’s role can be expanded to help individuals through every stage of legal proceedings they are involved in.

Tests are also planned to measure the impact of Lol’s work.

Mr Almendros said: “A GP in Cahors has agreed to run medical tests to better understand Lol’s work and confirm the psychological benefits for victims, based on their heartbeat and oxytocin levels."

The story will be told from the dog’s perspective and will describe Lol’s kind attitude and unique experiences as a legal support dog.

A portion of the proceeds from the book will be donated to France Victimes.