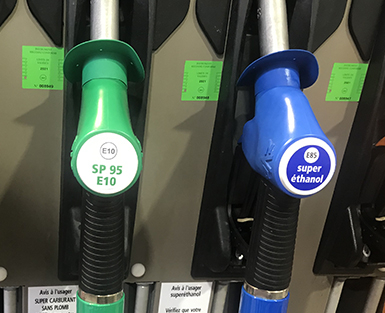 It should be an easy switch, but motorists are rejecting a green fuel that is half the price of petrol despite a law change to encourage vehicle conversion.

A new decree allows more cars to be converted to run on E85 biofuel but although E85 costs about €0.74/litre and standard SP95 petrol is €1.60 or more, drivers are not convinced.

Apart from Ford, neither are carmakers.

E85 contains a high percentage of bioethanol alcohol made from plants – 65% to 85% – and releases less CO2 into the atmosphere when burnt.

Its key drawback is that cars must be converted to use it and have the carte grise changed to specify E85, which was not simple. Now more cars can be adapted and registered – but there is no queue to do so.

Often called superéthanol and easy to spot by the blue pump handles, it is available at service stations across France – a major change from its launch nearly a decade ago. Then, a number of makers sold flexfuel cars (able to take petrol or biofuel) but few pumps sold it.

Now there are more pumps – new service stations are required to sell biofuel – but few cars are converted to take it.

Only Ford sells cars to run on E85, with six models. Otherwise drivers must use bolt-on electronic boxes and sensors. These modify a petrol (not diesel) engine set-up to suit E85.

The decree extends the possibility of using E85 in cars fitted with exhaust particle filters, as well as those over 15CV (a French measure of power used for tax purposes) so fairly or very high-powered, often luxurious, cars.

Boxes must be installed by professionals and, after fitting, the carte grise must be updated.

This opens the way to fiscal incentives, such as a free or half-price carte grise. Costs depend on the number of cylinders and the type of injection, with indirect fuel-injected motors cheaper than directinjected motors.

Denis Stanislas, of Biomotors, a leading manufacturer and installer, said: “The new decree opens up the market and now just about any petrol-engined car produced since 2001 can take our box and be certified by the government.

“I am sure more people will start to use it, not just to reduce their CO2 emissions but also because it is so much cheaper to run, especially as petrol prices have started to rise sharply.” Biomotors’ boxes start at €899, fitted, for a four-cylinder indirect- injection motor and up to €1,999 for an eight-cylinder direct-injection.

A car owner who drives about 15,000km per year would take about 18 months to recover the cost of fitting from fuel savings. All parts of the motor which come into contact with E85 are covered by Biomotors’ warranty if the motor breaks down and if the manufacturer refuses responsibility.

A Renault spokesman said it had chosen not to build motors to use E85. “We have built them in other parts of the world and they run very well but in Europe we will not produce cars for E85, which has lower octane levels than other petrols.

“Our energy in making driving cleaner is going on our hybrid petrol-electric engines which use very little fuel but do not run on E85.”

When should I apply to renew my French driving licence?

A guide to French car insurance