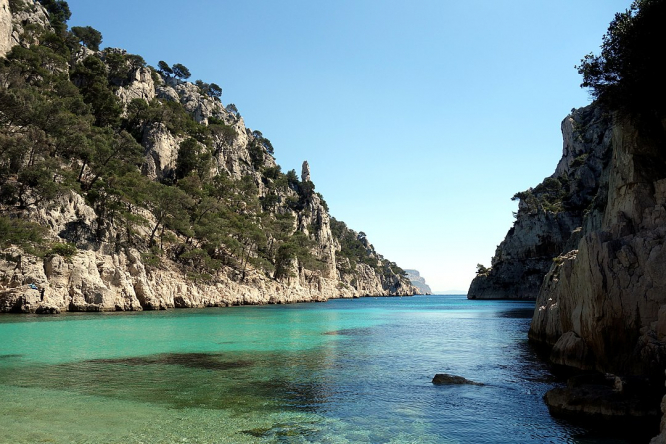 A view from the bottom of the Calanque d'En Vau, in the Calanques national park, near Marseille
By Connexion journalist

The suggestion comes after President Emmanuel Macron announced the creation of four new national parks this week, but did not confirm any new State funding for them.

This has led some environmental specialists to suggest that charging for entry to the parks could help make up the shortfall, and make it easier to protect these natural spaces.

The debate comes after a 2018 expert report considered the issue, while former ecology minister Nicolas Hulot also broached the subject before he left the government, saying it was “a path to consider”.

But while it is common to pay for a ticket to hike in a national park in other countries - such as the US, South Korea, Costa Rica and Chile - in France, the move is “completely taboo”, according to Gilles Martin, president of the scientific council for the Port-Cros national park (Var, Provence-Alpes-Côte d'Azur).

Not such a strange idea?

But expert Simon Jolivet, who is conducting a legal study into the suggestion and is deputy general of French environmental law society, la Société Française pour le Droit de l’Environnement, said paying for national park entry would not be such a departure.

He told newspaper Le Monde: “It would not be so abnormal to pay for entry to a ‘natural museum’, in the same way as you pay your entry to an art gallery such as the Louvre.

“For cultural heritage, entry rights have been in force for 100 years. It was a big controversy at the time, but we don’t really talk about it much today.”

Mr Jolivet added that charging for tickets could make sense, as national parks are otherwise funded by the ecology ministry, which “is one of the ministries that, traditionally, suffer most heavily from any State spending cuts”, he said.

The debate also comes after the creation of two new national parks in 2012 - Calanques near Marseille and in Bourgogne - without additional budget allocated to their upkeep. This led to sustainable development commission, le Commissariat Général au Développement Durable (CGDD), to discuss new methods of funding.

The idea to charge for entry was one of the suggestions, and the report suggested that the government “consider the opportunity to think deeply” about the idea of charging for park entry.

The Carbet Falls site, on the French island of Guadeloupe, does charge €2.50 per ticket for access (Photo: Bobyfume / Wikimedia Commons / CC BY-SA 3.0)

Yet, environmental union SNE-FSU has called the suggestion “an aberration”, while union CGT-Environnement has already denounced the idea, saying: “Making us pay for our right to nature? We are totally against it.

“We are a public service, for the public. We are not here to make people pay entrance fees.”

Jérome Bignon, Senator for the Somme department, who has recently put forward a bill that would limit public access to natural sites in a bid to protect them, said: “Free access to nature for everyone is a French cultural principle. [Charging] would not be welcome. Obviously, people just would no longer go.”

Mr Martin conceded that “we do not want to suggest that parks should only be accessible to people who have the means. But this is something we can think about. We could think very carefully about the categories of prices; change them according to peak times...but it is a taboo subject.”

Frédéric Goulet, staff members at Ecrins national park and a manager at union SNE-FSU, said: “If we want more people to be interested in parks, to understand the biodiversity, we will not get there by charging for entry.

“Before we start debating this, let us debate ecological funding in France. Until we have proof of the contrary, I would say it is not hikers who are the cause of environmental damage.”

No national parks on mainland France yet charge for entry, but on the island of Guadeloupe, the Carbet Falls site - a particularly attractive, popular area (pictured, above) - does charge €2.50 per ticket for access. This allows the area to offer extra services, such as picnic zones, toilets, and observation decks.

Some have suggested that a similar model to Guadeloupe could exist on mainland France.

But Mr Jolivet said: “To go back on free access, which has always been a key principle of entrance to natural spaces, would of course be a delicate political issue.”

Yet, Mr Martin said that the government’s lack of funding for the sector would make charging inevitable eventually. He said: “I am convinced that in the long-term, we will have ticket offices at the entrance of parks. But I will not be there to see it.”

The debate comes in the same week that President Emmanuel Macron announced a series of measures to limit access to Mont-Blanc, to protect the biodiversity and respect of the mountain.