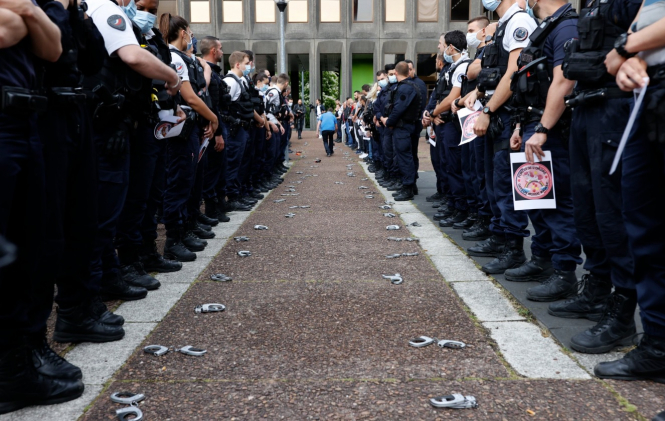 It came after interior minister Christophe Castaner this week announced a series of new measures designed to tackle racism and alleged discrimination by the police.

He called for a “zero tolerance” approach, and the suspension of any police officer suspected of racism. He also announced that the controversial “chokehold arrest” method - which involves leaning on a suspect’s neck - will no longer be taught at police academies in France, and would be banned.

He said that police officers would be required to use body cameras more, receive ID training, and that the country’s major police bodies would be “reformed” to enable them to work together more “transparently”.

Mr Castaner said “each transgression, each excess, each word, including racist expressions” would be “the object of an inquiry, a decision, a sanction”.

The measures were announced as protests continue around the world - including in France - against police violence and institutional racism, sparked by the killing of an unarmed black man, George Floyd, in the US by a white police officer in Minneapolis, Minnesota. The officer, Derek Chauvin, has since been charged with second- and third-degree murder.

Protesters in France have also called for justice for Adama Traoré, a young black man who died in police custody in 2016.

But police in France have reacted angrily to Mr Castaner’s announcements, seeing them as a general accusation of racism and violence.

Union general secretary Yves Lefebvre said: “Police in France no longer consider Christophe Castaner as the supposed “first police officer” in France. He left us behind on Monday, he put us out to pasture on Monday. It’s now up to him to re-climb the Everest of trust.”

The union called on officers to “not arrest, not intervene” on Thursday June 11, and to “gather in front of their police stations at 18h, and place their handcuffs symbolically on the ground”.

Around 60 police also signed their names this week in an open letter published in weekly newspaper Marianne. They wrote: “We will not allow our brothers in arms to be treated as though we are racist...we refute the statement that ‘the police is racist’.

Fabien Vanhemelryck, general secretary of another union, Alliance Police, also criticised Mr Castaner’s comments, and said: “An interior minister must be behind his police officers.”

Police director general Frédéric Veaux, and police prefect of Paris, Didier Lallement, have each written to their respective officers, to signal their support.

Mr Veaux wrote: “Faced with confusion from a minority, I share with you a feeling of profound injustice.” The director general had already written of the “disgust” and “feeling of abandonment” felt by police after Mr Castaner’s comments.

Mr Lallement said: “In this very strange time when the challenges to our actions are permanent and becoming more and more aggressive, I want to tell you that there is no doubt [in your abilities].”