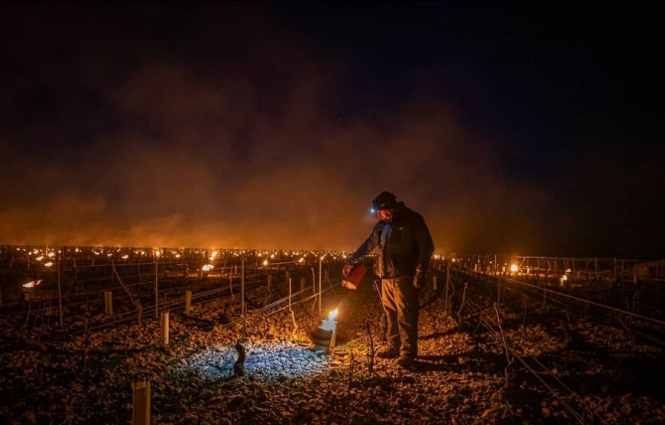 Record low temperatures in the north, centre and east of France are set to continue until at least this weekend Pic: Yann_de_la_calle / Instagram

Wine producers in France are taking radical action - including lighting fires, and giving their plants special “tea” - to stop their vines from freezing, as record low temperatures are forecast this week.

Winemakers have lit hundreds of “crop candles” in a bid to increase the temperature around the vines.

The controlled fires can increase temperatures in the surrounding area by as much as 3C, but can cost up to €2,000-€3,000 per hectare.

One producer, Jean-Christophe Gutrin, told France 2: “The temperatures here have fallen to less than 1.5C, so it’s preferable to light [the candles]. We’re lucky, at least it’s not raining.”

But he said: “Even though we’ve put candles out, there’s no guarantee that it will work.”

Another producer, Patrick Carillon at the Domaine Fery in Côte-d'Or, has even invested in a giant fan to help warm the crop.

He said: “It takes the warmer air from higher up, and pushes it to the ground. We can raise [temperatures] by up to 2C.”

Some larger vineyards have even hired small helicopters to fly low over vines to move hotter air downwards to the soil - at a great cost.

Francois Lecaillion, technical director at the Domaine Armand Heitz in Côte-d'Or, has said that these tactics are only temporary measures, and that the industry needs to evolve if it is to face up to increasing climate challenges.

This might include planting more weather-resistant vines that flower later, and are therefore less vulnerable to late frosts and cold snaps.

From candles to tea

Producers in the Mâconnais region, are taking another approach: using herb tea infusions to help their vines weather the cold.

Gautier Roussille, co-manager of the Guillemot-Michel estate in Clessé, Saône-et-Loire, told FranceInfo: “We put thyme, oregano and wild sariette...then valerian and meadowsweet are added, as well as yarrow, which will help the whole solution to work. Horsetail is also added, and we sometimes use honey.

“This helps the vine to prepare for ice, by changing the composition of the sap a little, by enriching it with sugar.”

The infusion is then sprayed onto the vines at least 24 hours before the first freeze is forecast. The solution only works if the temperatures stay just below freezing but no lower, at around -2C or -1C maximum.

Mr Roussille said: ”With this solution on the plants, we can increase [temperatures] by 1-2 degrees. If it drops even lower, to around -5C, as we had in 2019, it’s not enough. It might save some plants, but not all.”

The manager has also installed antifreeze heaters at the foot of the vines, to guard against even lower temperatures in the coming days.

It comes as temperatures in France have dropped to record lows for the month of April, with the cold expected to last until this weekend and beyond - especially in the north, centre, and east.

The drop is even more noticeable given that temperatures were summer-like just a few days ago.

In Beauvais, Oise, the mercury at the town’s Meteo France station dropped from almost 25C a few days ago, to registering -6.9C last night (Tuesday April 6) - the lowest seen since records began in the town in 1944.

Less than a week ago, the town recorded a high of 24.8C - again, a record for this time of year.

The cold is due to what forecasters call “an arctic invasion”, as the hot air last week is chased away by a cold wind blowing from the Arctic.

The low temperatures are expected to last until the weekend and beyond, with snow forecast for the Alps from 1,000 metres; hail and sleet predicted in the east of the country; and cold rain expected in Provence Alpes Côte d'Azur and the south.